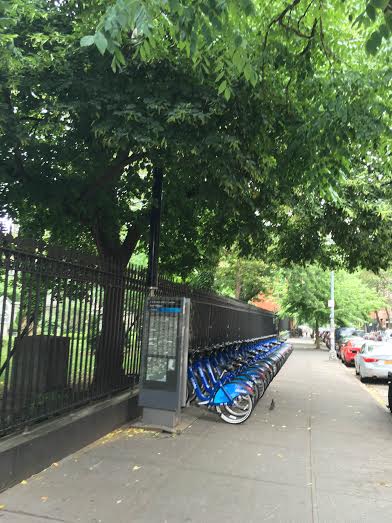 We noted the arrival of a Citi Bike docking station the other day outside the New York City Marble Cemetery on Second Street between First Avenue and Second Avenue... 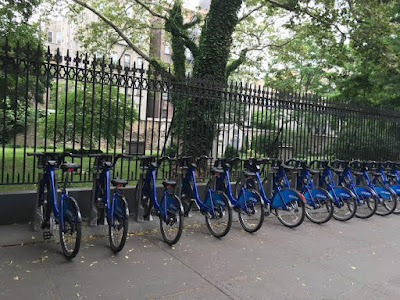 For starters, it is only temporary, having moved from Second Avenue and Second Street outside Rosie's to make way for ongoing work by the city's Department of Design and Construction.

We wondered if maybe Cemetery officials requested this. (Handy for their Neighborhood Open days.) Or if not, how a Citi Bike docking station ends up in your front yard, so to speak.

Here's what Colleen Iverson, director of the New York City Marble Cemetery, had to say about it.

"No, we very much did not request this. We were contacted by a Citi Bike rep in April regarding a temporary placement and we requested to meet on site with them to discuss it. The meeting never took place as we were told the temporary location looked like it was no longer needed. We relaxed and thought we'd had a narrow escape. But, it seems it was only a postponement. We received zero notice of the installation."

A Citi Bike rep who contacted the Cemetery in April apologized for "an internal communication failure." Still, Iverson described the process as "being informed, not consulted."

"I did mention, to no avail, that part of the operation of a historic landmark site that doesn't have the resources to be open every day is to ensure a clear view from the sidewalk and that an eye catching row of bright blue detracts significantly from a visitor experiencing a view showing both the historic nature and the natural beauty of the grounds," Iverson said.

The docking station for 31 bikes is expected to be outside the historic cemetery founded in 1831 through the end of August.

Said Iverson: "We are not anti-bike but as far as the pros and cons and relative merits of different forms of transportation goes, the cemetery would have to say it sees itself as firmly pro-horse and buggy."

The sea of blue bikes might draw attention to the cemetery and get them more visitors. Much ado about nothing.

The cemetery is only open a few days a year. A sign noting that the docking station is TEMPORARY would be appropriate for bike patrons, neighbors, visitors, etc.

There is something to be said for the joy of passing by a few feet of sidewalk that is just that, sidewalk, quiet and calm, near the historic venue.

Pfssshhhhttt. History? Who needs history? Views? Who needs views? Respect? Nothing you'll get in NYC any more if you're not a global corporation, a real estate developer, or a member of the 1%. Move along, move along, nothing to see, except a bunch of screamingly ugly bikes branded with the name of one of the banks that almost caused the world economy to collapse 8 years ago.

Thank god it's only temporary, I won't go so far as to call it sacrilege, but it's an eyesore. and I bet if I chained my bike up to the graveyard fence I'd get a ticket or something.

Wow, we're still on this? Such a non-issue.

Anon. 9.06, if you don't think this is an issue, then don't read the post and the resulting comments, because you are obviously in the minority on this blog. Go read tripe like East Village Today instead and leave EVG to the cognoscenti.

the policy or practice of acquiring full or partial control over another territory, occupying it with settlers, and exploiting it economically.

Does the cemetery own the sidewalk on East 2nd Street? No? OK.

"[T]he policy or practice of acquiring full or partial control over another territory, occupying it with settlers, and exploiting it economically."

Iiiiiiiinteresting. So flooding an area with "settlers" (either through encouragement or forcibly, such as by destroying their native economies and/or destroying their homes) and then exploiting that area economically, through, we can presume, the decreased wages the increased supply of workers brings (leaving aside the question of skills, etc. for the moment), is the definition of colonialism. Faaaaasuuuuhnayteeeeng.

So, essentially, the "migrant crisis" is colonialism; immigration into the U.S. since 1965 has been colonialism. Questions, questions.

Let me see. No one can do the same -- park their cars or bikes or take over that spot -- since the sidewalk isn't owned by the cemetery, but by the public -- except for the beloved and blessed Citibikes worshiped by the holy Citibikers.

What logic. ""Well, I've never seen no plants grow out of no toilet." Idiocracy!

Where is Dorothy Rabinowitz and her complaints of Citibike "begriming" the city when no one needs her?

Yes the migrant "crisis" of the white suburban/Middle-Americans is Christopher Columbus syndrome. This may be the first time you've heard of it since you're buried under your designer bagels.

"Does the cemetery own the sidewalk on East 2nd Street? No? OK." - And yet, New York has abrogated its ownership of the sidewalks and transferred oversight of them to whatever they are laid in front of. If you trip on a sidewalk and are hurt, you can no longer sue the city - you have to sue the building owner (or whatever entity) who administers that particular patch of cement. If there are cracks or uneven edges on the sidewalk, the city does not repair or replace the slabs - no, that's up to the building owner/entity to do, at his or her expense. So the city refuses to accept any responsibility for the sidewalks, until they want to profit from them, then they're all over them. Literally.

These bikes are such corporate blight no matter where they are dumped. It probably never occurred to CitiBike that people may want to experience this tiny piece of history, and maybe even take a photo or two, without their crappy bikes yucking up the area.

Does the cemetery own the sidewalk on East 2nd Street? No? OK.

So basically Citibike can just install their precious docking stations anywhere that is publicly owned in the city without any permits, or permissions, or input from the locals. How is that a non-issue.

Wasn't there a time where the monarchy would just barge into someone's door and steal your property and family. And didn't 'murica just celebrated Independence Day.

In sum, keep bending over and being screwed forcefully from your behinds by your corporate and moneyed overlords. OK?

Such a lack of respect, to the location and to those buried there.

Describing a bikeshare system that is simply trying to stay afloat with advertising on them as corporate overlords is totally missing the boat on the actual issues related to corporate greed and whining about the 1-2 months they will be in front of a cemetery that is basically never open to the public makes little sense but don't let rational concerns get in the way of your righteousness and indignation at a nonissue.

Anonymous 4:06am -- You make a very good point. It's not for nothing the East Village is called a village.

11:56 AM: I suggest you don't visit D.C., Chicago, Boston, Austin, San Francisco, Paris, Shanghai, London, Barcelona, Montreal, Brussels, Tel Aviv, or a hundred other cities with bike share programs. Your head will explode. You might also want to avoid the National Parks, where there are cyclists ruining the wonders of nature...

But does the bike sharing program in D.C., Chicago, Boston, Austin, San Francisco, Paris, Shanghai, London, Barcelona, Montreal, Brussels, Tel Aviv, or a hundred other cities just take over their public sidewalks in discordance and without respect to the history of a place and regard to its residents? Yeah.

Can't wait to feed the birds extra in this park.