A-Rod owns part of this building on Avenue D 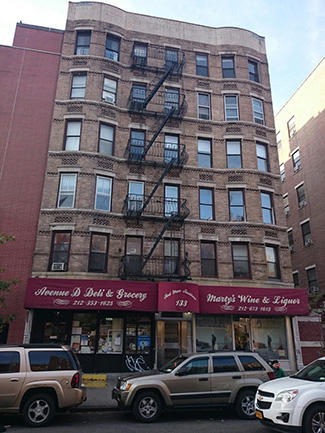 In early June, the Post reported that former Yankee Alex Rodriguez teamed up with real-estate veteran Barbara Corcoran to buy "a 21-unit rental tower" in the East Village. However, the two declined to divulge the address.

In a follow-up piece, the Post discloses that the property is 133 Avenue D, a building between Ninth Street and 10th Street.

That address made headlines last August when Michael Cohen, President Trump’s former personal attorney and fixer, sold his stake in the building. According to The Real Deal, Cohen — now serving a three-year sentence at Otisville Correctional Facility in upstate New York — sold four stakes to Vintage Group, his joint venture partner in the ownership of 133 Avenue D, for $4 million.

As for A-Rod, 133 Avenue D is his first foray into New York City real estate. However, his Monument Capital Management company owns about 15,000 apartments in 13 states. He plans on buying up more NYC properties. Per the Post:

A-Rod Corp. has teamed up with real estate investor and operator Ofer Yardeni of Stonehenge NYC and brokerage guru Adam Modlin of the Modlin Group in what they say is an exclusive as-yet-to-be-named venture to root out and purchase all sizes of apartment buildings and bulk condominium units in the Big Apple.

"Rental tower"?? How about "walk-up on Avenue D" -- that wouldn't sound nearly as chi-chi, would it?

A-Rod and Ms. Corcoran, working together to find the "upside" of this and other buildings. I feel sorry for all the tenants there.

Tenants of these buildings: time to get in touch with Cooper Square Committee and Good Old Lower East Side nonprofits! They are miracle workers who will help you keep your apartments in light of this new "investment opportunity" for the 1%ers. Start a group email list. CC the community representative at Councilwoman Carlina Rivera's office on it. Record everything that goes on in the building. Take photos of your apartments in detail so you can show them when you have huge cracks from the construction. Document everything. Clean out your Facebook accounts, immediately! They undoubtedly already have sleazy lawyers hired who have help combing your FB accounts and other social media to find out about vacation homes and other residences. Make sure the primary lease holder is in residence, if not, get the lease changed immediately. Your health and nerves may get destroyed by the years of construction but at least you will still have your homes and a few not super entitled neighbors. Take it from an ICon Realty resident, you will not regret it. Good luck!

WHAT A DISGRACE.
SHAME ON BARBARA..I THOUGHT BETTER OF HER.

@Shelly - Why?!? She's a real estate developer. It's what she does. How do you think she got so rich and powerful, dealing in buildings for a low-income audience?!?

This is so heartbreaking and shameful. This poor man. How much money do you need and how low will you go to get it, A-Rod and Barbara Corcoran? How do you live with yourselves and your utter moral bankruptcy?

I hope Ryo sues for loss of his property, and emotional duress caused by the building keeper, and slumlord land sharks that own it.

My opinion of Ms Corcoran has changed. I'm really upset for this gentleman. Even if had died, why would you trash his belongings so quickly without waiting to see if family claims them? And also, the pictures shown of this apartment show it's in disgusting shape. Whats with his ceiling? Would YOU or would you allow a family member to live like this Barbara Corcoran??? Yes. I see you donated 12k. -- why? Because you feel guilty and you've been exposed. Shame on you.