Breaking: Parks officials say they will NOT be putting down a synthetic turf in Tompkins Square Park; skateboarders rejoice 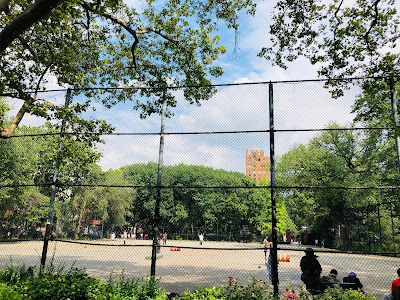 On the eve of a rally to save the Tompkins Square Park multipurpose courts from a future of synthetic turf, Parks officials have announced that they will no longer move forward with their plans.

Organizers behind tomorrow's rally posted the news on Instagram...

WE WON. The city called and announced they are NOT going to install AstroTurf at Tompkins. It’s not a coincidence they made the decision the day before the rally. We organized, made our voices heard, and made a difference. TF IS HERE TO STAY! Big thanks to @quartersnacks @stevernyc @carlinalrivera @supremenewyork @hardbody.nyc Everyone still come out tomorrow! It’s a celebration! Not a protest! I could cry right now 😅✊

Thanks to the Tompkins community who made this happen and @nycparks for listening.

As we reported on July 2, the city had plans — apparently only known to residents who may have attended a Community Board committee meeting in May — to cover the courts with synthetic turf, rendering the space useless for skateboarders and street hockey players, among other groups.

The turf project, happening at several area parks, is a result of the city's flood-protection plan that will close East River Park next March for 3.5-plus years. The city needs to find space for the sports teams and youth leagues who use the fields along East River Park.

More than 32,000 people had signed the petition — titled "Save Tompkins Square asphalt!" — since early July.

Instead of a rally tomorrow, the skateboarders are now planning a celebration.

• Skateboarders upset over plan to add synthetic turf to the northwest corner of Tompkins Square Park (July 2)
Posted by Grieve at 6:39 PM

It’s like one of those G-rated movies from the 1980s when a group of kids gets together in order to prevent the demolition of the local roller rink by greedy real estate developers. Congratulations on the good work!

Also FYI there will be a March and rally on Sat Sept 21st protesting the current plan that will close and demolish the entire east river park for 3.5 years starting next spring http://eastriverparkaction.org/2019/09/01/march-and-rally-for-east-river-park-saturday-sept-21/

Happy skateboarding! I have enjoyed watching everyone as I pass by that corner. I tried it myself a few years ago and it is harder and scarier than it looks...

ONE PARTY RULE doesn't have to be ONE PARTY RULE if you stand up for what you believe in!... 32,000 signatures on a petition... WOW! The organizers should be proud. .. But now we have to get rid of the garbage trucks and stop the destruction of East River Park.

@logrhythm - thanks for the info about the East River Park march, I will definitely be there!

Wow. How great is this. Congratulations to the crew who came together to do something. Activism takes work, but if you don't try to change things there is no chance for change, but if you do try, well you never know . . .Skate on!!

So happy that the skaters won. I enjoy the freeform nature of the park in its current state. Many, many people utilize that area, so proved by the number of signatures. Nice to get some good news for a change.

I just had a nightmare that the real reason the city decided to keep the asphalt is so that they can park the garbage trucks here instead of on 1st Avenue. Then I woke up and realized we are living through a nightmare every single day anyway, so I fell much better now.

So is there such a petition to sign regarding the East River Park?

22 year old East Village resident Adam Zhu created the petition. A lot of people helped amplify the story and the link to the petition, including Chloe. Supreme and several other brands also played a key role as well as media outlets like Paper (and Grieve). So I'd say there are many people to thanks, especially Steve Rodriguez, who set up a meeting between the skateboarders and the Parks Department.

To single out Chloe does a major disservice to the local residents who played more of a role than she did.

Score one for the good guys! I'm glad the Parks department came to their senses, skateboarding is not a crime

No offense was meant. And it doesn't do a disservice to anybody. In politics many people help and all are needed.

Though asphalt would not be my choice in a park. A park should be as green as possible considering the asphalt jungle outside it. That said I am glad a democratic process has worked. The skateboarding and other sporting activities were important to a segment of the community and the Parks Department proved itself not to have deaf ears.
It has been over 25 years since the TSP has seen a major renovation it is more then overdue. It is a vital recreational area of the East Village rich in history beyond the riots of 1993 and 1864. In some areas such as the chess area redesign and purposing should be considered. At the very least the inside pathways need to be redone perhaps a reach out to the Central Park Conservatory and their vast experience and knowledge for ideas and approach.