Now the Basics Plus on University Place is closing 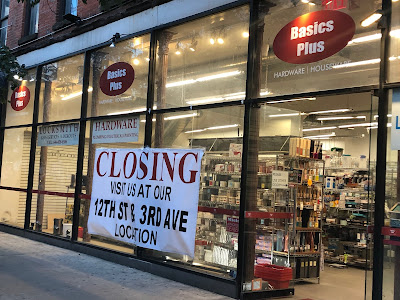 Store closing signs are now in the windows at the Basics Plus on University Place at 13th Street. (Thanks to EVG reader Doug for the above photo!)

The signage directs future patrons to visit the East Village BP on Third Avenue at 12th Street (seen below)... 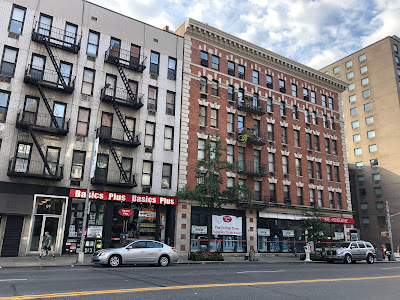 [Photo from this past weekend]

As you'll recall, back in March, the Basics Plus on Third Avenue announced that they were closing. At that time, customers were directed to shop at the University Place outpost... 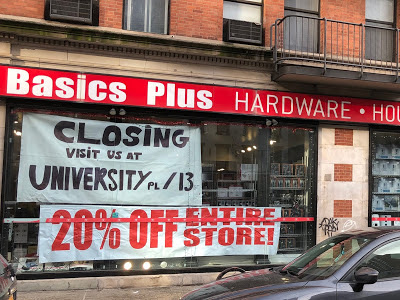 [Photo from March by Steven]

However, closer to their announced April 29 closing date, the housewares store changed plans, and downsized their square footage at the Third Avenue location.

Who knows what might happen next with Basics Plus, which opened in the East Village in August 2014.

Previously on EV Grieve:
Basics Plus apparently not closing on 3rd Avenue after all
Posted by Grieve at 4:01 AM

Email ThisBlogThis!Share to TwitterShare to FacebookShare to Pinterest
Labels: Basics Plus, closings 2019

at least one location survives. seems like not a well managed company.

Or maybe they had a rent increase on University Place, or maybe the landlord on Third Ave. got real.

The funny thing is that their business should be a cash cow. They're basically in the same market as pharmacies, home supply stores and supermarkets, which all have an overlap with the kind of goods that these stores sell. It's well-made, prominently branded stuff (with a few exceptions we can overlook) that has decent retail margins - none of these retailers are having blowout sales or pricing the items as loss-leaders. You can get it cheaper on Amazon, but that's not the same as stopping-by for a quick pickup of something needed around the house.

Maybe the stores are a little too big or carry too many items. That's fixable. But that shouldn't lead to the chain shrinking. And they're definitely shrinking.

I think this is another sign that commercial leasing in Manhattan is going very awry, with landlords needing very big rent payments to fund their lifestyles/financial goals, and with the city fattening itself on skyrocketing tax income driven by rising property assessments. None of our retail space availability is part of any neighborhood plan except some clumsy zoning codes, and everyone's waiting for "the market" to sort things out. Don't hold your breath on that. This space is going to be empty a while if a Basics Plus couldn't make it there.

This store closed cuz they oversaturated the area. Two stores literally two blocks from each other was dumb.

Their location on John Street in the Financial District has closed as well.