The current exhibition surveys Coraggio’s entire body of work, including paintings in expressionist and graffiti style, mobiles, furniture, neon, sculpture, mixed-media collage, and both classic and 3-D graffiti. The exhibition will also include recent collaborations with well-known downtown artists, and an installation of his painted and “sculpturalized” car that has become a recognized cultural fixture on the streets of New York City over the last 10 years.

Coraggio is a founder of the Rivington School sculptors group. He welded a massive post-apocalyptic sculpture garden of rusted metal that was a landmark at Forsyth and Rivington Streets in New York’s Lower East Side. Coraggio was also the architect of the Gas Station, a performance space, after-hours club, and sculpture garden that sat on Second Street and Avenue B well into the 90s. These seminal downtown art spaces were the vanguard of wild autonomous art activism in the face of rapid gentrification.

The opening for the show, titled "Ramifications," takes place from 6-8 p.m. tomorrow. You have until Oct. 10 to see the exhibit. There's also a special closing event on Oct. 12.

Find more details at the Howl! website. The gallery is located at 6 E. First St. between Second Avenue and the Bowery.

You can also find some of his work in the sculpture garden behind the Kenkeleba House on Second Street between Avenue B and Avenue C... 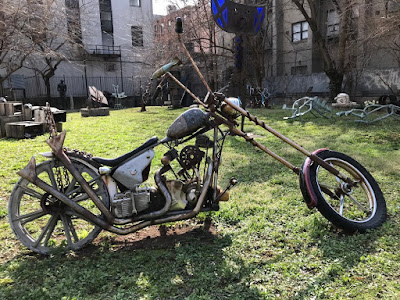