About that Bill de Blasio-tagged van on East 6th Street 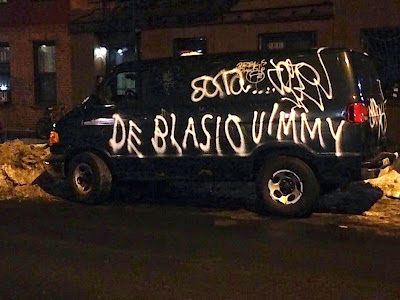 The other evening we noticed this van with the Bill de Blasio tag on it parked on East Sixth Street between Avenue A and Avenue B.

Turns out the van belongs to Vit Horejs, artistic director of the Czechoslovak-American Marionette Theatre. He owns several vans, all named Molly, to transport theatrical equipment.

According to Bonnie Sue Stein, Vit's friend and director of the nonprofit organization 7 Loaves Inc/GOH Productions, the de Blasio tag arrived about two weeks ago.

"The van was not tagged for weeks when we got it, but as soon as one person started, it hasn't stopped," said Stein, a community organizer in the East Village for more than 30 years. "It's frustrating. Vit says he wishes they did a better job. It's not very well-executed. It's a mess. People have been laughing about the de Blasio tag. And one woman who saw it said we should sell the van to a museum because of the de Blasio tag."
Posted by Grieve at 4:49 AM

Another van was tagged, not with Deblasio stuff, but regular names etc, on 5th street a couple of weeks ago. Since most of these older vans do not carry coverage for this sort of nonsense, these assaults on property represent the loss of hundreds of dollars if not over a thousand out of the pocket of the working guys that own most vans to get them repainted. Wonder how the 'graffiti is art' and 'language of the streets, man' crowd feels about this.

I'm always down for some neighborhood graffiti, but a clean van, don't fuck with someone's car.

This is definitely a Jim Joe tag.

This puppet guy keeps turning up more often than almost any other marginal artistic group that I've heard of. I went to see his show many years ago somewhere uptown. It was lovely, he was lovely, the puppets are gorgeous. Too bad about the van. It would be a good idea to bring it to one of those reality TV shows that fix things in a clever way.

Yep, that's Jim Joe. That van will be worth something now that he did the cover for the new Drake album. ��