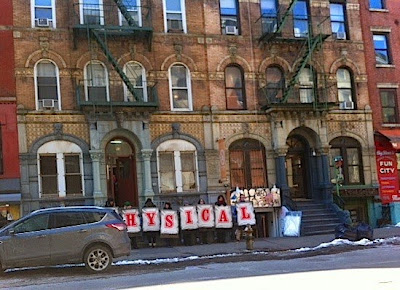 EVG reader Allen Semanco came across this scene this morning at 96-98 St. Mark's Place, the buildings between Avenue A and First Avenue that served as a backdrop for Led Zeppelin's 1975 studio album "Physical Graffiti."

A photographer said she was setting up this shot as part of next week's release of a 40th anniversary remastered/expanded super-duper-deluxe version of the album.

Previously on EV Grieve:
Tenements of the holy: 'Physical Graffiti' 40 years later
Posted by Grieve at 10:35 AM

I doubt any of these latter-day shits even know anything about Zeppelin, they are too busy with their Justin Biebers and Maroon 5's and whatever the fuck they listen to now. Kanye West, that great "musical" genius of our time.

I'm an old man. I hate everything but Matlock. Ooh, it's on now!

Hey Grandpa, You ever watch Rawhide? I always get a kick how its seems every episode Rowdy gets smashed around but there's always some cute cowgirl around along the trail to patch him up.

@ Anonymous 10:53AM...You seem like a friendly person. Shoot me a text and we can hang!

Of course I did, nygrump. I know the young ones think we old timers aren't any fun, but we'll show em. We'll show em all - ah ha ha ha!

Exactly anonymous. Why do people need new bands? Everyone knows rock attained perfection in 1974. It's a scientific fact.

Hey. I am anon 10:53. I am not that old. Physical Graffiti and almost every other Zeppelin album came out before I was born. So this is not about liking something because it's old. It's about being able to distinguish between good music and crap.

Yo, Grandpa Simpson, I'm really happy for Iggy Azalea and Katy Perry and Taylor Swift and any of these female artists, and I'ma let you finish, but Beyoncé is the best artists of all time! Of all time! Led Zeppelin needs to respect artistry and they should give their awards, praises, commendations, money, fame to Beyoncé, and at this point, we tired of it,

Ooh, Kenje! Put some Lister's carbolic unguent on a wad of cotton, put the cotton it in yer ear. That'll stop them shakes.