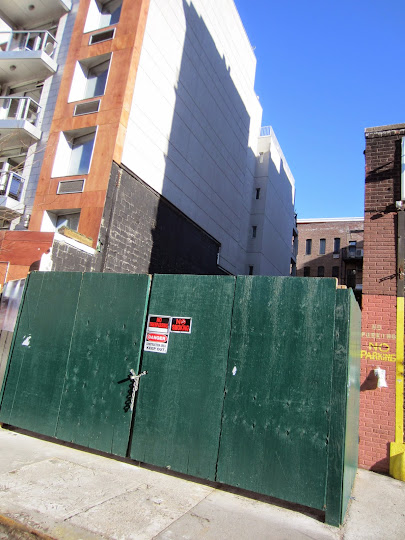 Work has commenced at 64 E. First St., where a 6-story residential building will rise from the ruins of the former La Vie club here between First Avenue and Second Avenue.

Last April, New York Yimby reported that there will be six residential units (likely condos) — "two duplexes, one spanning the cellar and first floor, and another located on the sixth and penthouse levels; each of the other four residences will be full-floor."

The units will average a roomy 2,250 square feet.

And now, the plywood sports the rendering of the building… 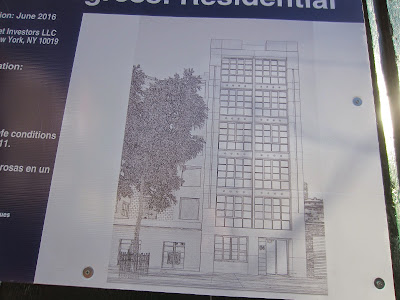 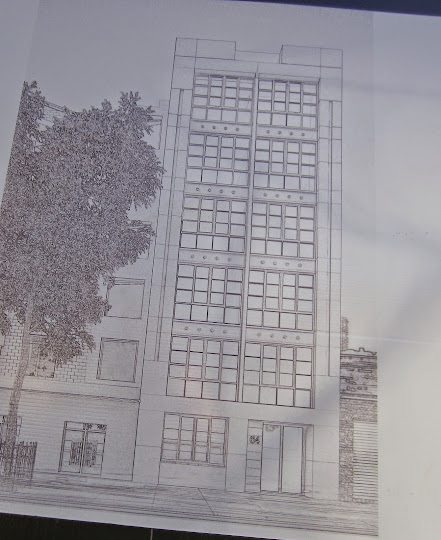 DOB permits show that Ekstein Development is behind the project. The architect of record is GF55, whose other neighborhood contributions include Jupiter 21 at the site of the former Mars Bar.

Here lies the remains of La Vie
Posted by Grieve at 5:05 AM

Each apartment equipped with a 20,000-watt sound system, on-staff D.J.

If it DID lean to the right, it might make it a bit more visually interesting.

I hope Abetta Boiler next door isn't affected and will stay in business for years to come.

I like it. Hate to say that about something I will never ever even think for a milisecond I could afford. It has a industrial loft or art studio loft style that fits in with older aspects of the neighborhood.

Yet another sweet space I could never, ever afford to live in!