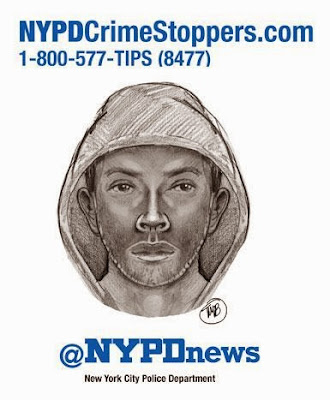 Police officials have released the above sketch of a suspect wanted in connection with six downtown shop robberies in recent weeks.

The first robbery occurred on Jan. 21 at AuH2O Thriftique, 84 E. Seventh St. between First Avenue and Second Avenue. According to published reports, the suspect entered the shop around 5:30 p.m., and demanded the money. He fled with $240. An accomplice was standing watch outside.

The suspect, working alone, then allegedly robbed five more businesses, including on Bond Street, Elizabeth Street and Mott Street. Gothamist has a rundown of all six robberies here. According to Gothamist, police described the suspect in the sketch as being 5-8 to 6-0 tall and in his 30s. No other information about the suspect was immediately available.

Is it my imagination or does this drawing look like the guy who is the main suspect in the murder across the street from The Adele?

? I don't know but the ninth doing real police work? That would take ethics, integrity, and truth. From my experience all the elements missing from those entrusted to SERVE , THE PEOPLE!!

I've seen that face before.