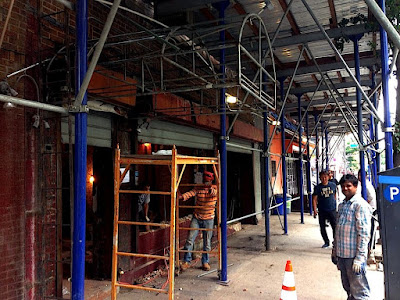 [Photo from Aug. 25 by Michael Hirsch]

Gandhi, the 31-year-old East Sixth Street mainstay, closed for good at the end of July.

As we pointed out on Aug. 5, Shane Covey, co-owner of Upstate around the corner, and Adam Elzer, operating partner at Sauce Restaurant, Supper, Lil Frankie's and Frank, are opening a new restaurant here on East Sixth Street just west of First Avenue.

Covey shared a few more details about his plans.

For starters, he's not closing or moving Upstate, the small seafood-centric restaurant with a rotating list of craft beer at 95 First Ave.

"I built that place with my Dad and my chef and I spend just about every waking moment in there and couldn't fathom moving it," Covey said via email. "I put Upstate in the East Village with the sole purpose of being a part of the community. It's a neighborhood place, and it's function is to be part of the community."

And why the new space?

"The problem is we turn so many area people away that it is driving me nuts." So he had been looking for someplace nearby to open what he describes as a neighborhood fish place.

And then the Gandhi space became available. He decided to team up with his friend Adam Elzer on the new venture.

"He asked what I was going to call it. I wasn't sure, so I paused. Adam said, 'let's name it after our fathers.' So Edwin and Neal's Fish Bar it is," Covey said.

He said that Edwin and Neal's will be "a mirror image of Upstate."

"I am just going to emphasize the raw bar aspect. At Upstate I have a full liquor license, but I don't serve booze. I like the craft beer aspect," he said. "So that is what we will be doing at the former Ghandi space. I want to source the freshest seafood and beer and make sure people can afford it. Makes no sense being a local joint if the locals can't afford it."
Posted by Grieve at 4:25 AM

An upscale expensive restaurant replacing a neighborhood restaurant ... do we celebrate or grieve? Soon it seems that all the Indian restaurants will be replaced on sixth street.

I dont know any "local" who'd be comfortable going to a bar called Upstate."

That's where you send your JD's.

If it's affordable I'd give it a shot.

The knee-jerk anonymous crankiness is getting tiresome. I'm a local and I love Upstate--one of the best oyster/beer specials in the city. And did you read the part where Covey emphasizes that the whole point is that it's a neighborhood place and it has to be affordable?

This guy is doing all the right things. He's posted a note apologizing to the residents for the noise and dust, and will invite them down for a meal. After putting up with 4 restaurant renovations downstairs on 6th St, I can tell you not one of those ever apologized, nevermind invite us down for a drink or meal.

"I want to source the freshest seafood and beer and make sure people can afford it. Makes no sense being a local joint if the locals can't afford it."

Doesn't sound particularly upscale or expensive. Read the entire post before jumping immediately to the comments and exercising your personal anger.

Upstate has been in the neighborhood for a while and is a great restaurant. Good food, good service and Shane is a great neighbor. Looking forward to this new venture as it may mean shorter wait times at Upstate. I wish them well

These are good dudes with good products. Glad they're the ones taking the space.

Depends on which locals you are talking about in terms of who can afford. For ex. there are those who believe that Luke's Lobsters is reasonable for a lobster sandwich. And an argument can effectively be made that yes, it is inexpensive for the product. And isn't this a re-working of the plan that was put out there for the space nxt to International which fell through? Yes, I do agree there is a complete lack of good fish places in this area. Sometimes you just want a deep fried grouper or whitefish and I am tired of going up to 125th St in order to find a decent place. Long John Silvers was a hope but the franchise was horribly mangled and mismanaged. Maybe this will be to fired fish what Mighty Quinn is to bbq. Personally I think it all depends on the breading, frying and tartar sauce and if the fish is halfway decent it should be a hit.

Oh to all those who commented hey, people can afford Upstate too. Not (all) people or even (most) but quite a lot can afford their prices.

Sorry to post again but realized that interview it is mentioned that the raw bar aspect will be emphasized. Whoever thinks that $12 for happy hour oysters and a beer is affordable also probably thinks that $2k for an east village apartment is a steal. No wonder most people live on credit.

The name is a turnoff right from the start.

I find it interesting that you think that Death & Company is a boring name for you. And when it comes to names would rather have a good story behind that name rather than it being an advertising made up concept. It seems that the trend is moving to naming places in honor of their parents which is sweet. (Am thinking of the place on the corner of St. Marks and 1st.)

The cranky people might realize that every space will have someone serving food/drinks in it, so someone who is at least making an effort is to be applauded.