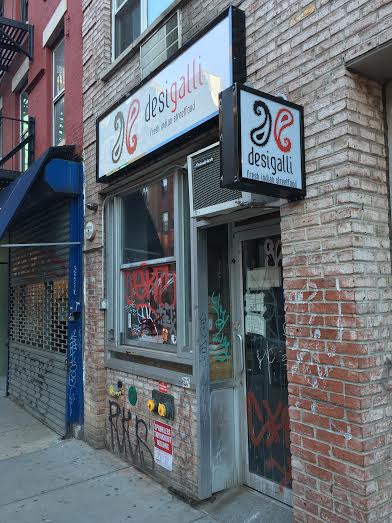 Mercadito Cantina closed at the end of January 2011 at 172 Avenue B ... and the space between East 10th Street and East 11th Street has remained empty even since...

Now, the proprietors of the well-regarded Desi Galli on Lexington Avenue and East 27th Street are opening a second location here... and they are seeking a beer-wine license for the restaurant during this month's CB3-SLA committee meeting next Monday.

There is little information on the questionnaire available to view at the CB3 website. The document shows proposed hours of 11 a.m. to midnight Sunday through Wednesday; until 3 a.m. Thursday through Sunday. The small space accommodate eight tables. There will not be a bar on the premises.

Apparently they will make a go of it at the start without serving beer or wine: The owners sent out a press notice announcing an opening date this coming Saturday (April 16).

[T]he updated poutine will be topped with tikka masala gravy and grated paneer. According to an announcement by the restaurant, the dish is inspired by co-owner PriaVanda Chouhan's childhood in Montreal.

You can read more abut the Avenue B location at the Desi Galli website.

Interesting to see how Desi Galli will fare with the popular Babu Ji nearly directly across the Avenue.

As for 172 Avenue B, the proprietors of Ditch Plains had hoped to open a lounge called The Asphalt Jungle here. However, in April 2013, the CB3/SLA committee voted to deny the Asphalt Jungle application during a rather ugly meeting. (Read about that here.) ... and the owners reportedly decided to scrap their plans.

Previously on EV Grieve:
About Mercadito Cantina closing:'Open letter to EV Grieve and CB3' (58 comments)
Posted by Grieve at 4:23 AM

Email ThisBlogThis!Share to TwitterShare to FacebookShare to Pinterest
Labels: 172 Avenue B

The difference between Desi Galli and Babu Ji is that it's afffordable. Their Indian street food is delicious, a nice addition to the neighborhood.

On the surface this looks like a good addition to the area however I don't understand why a they want opening hours on weekends till 3 am.

Anon @8:45 AM
I imagine they want to be open to catch the drunks leaving the bars in need of food to absorb the alcohol. This place is an indoor street vendor wagon. I hope it is good for those that like this sort of food.

This is just what the area needs -- more quick and casual spots that aren't upscale restaurants or cocktail bars.

Two of my favorite things... Indian food and poutine!!!!

This place is all about good food and the owner is nice, I've been to their place on Curry Hill and they make great Kati rolls. Welcome to the EV!

They obviously want to get the folks getting out of bars and who work late that might want something to eat. Live and let live.

So it's Saturday and I was excited to try this place and it was closed when I arrived... Still had the brown paper in the windows.