After 29 years, The Edge is closing on 3rd Street 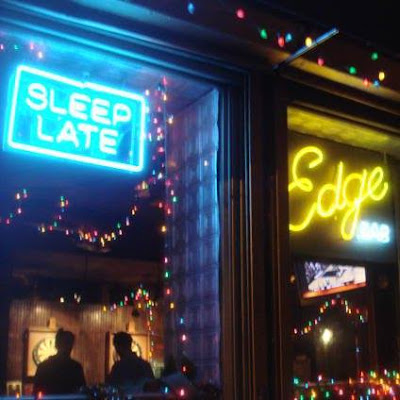 The Edge celebrated its 29th year in business Wednesday night by telling patrons that the bar was closing for good at the end of the month.

The owners confirmed that the bar, at 95 E. Third St. between First Avenue and Second Avenue, is closing.

We heard rumors earlier in the week about some landlord issues.

"We'll just say [the landlord] found an opportunity to sue us for a bunch of money that we can't pay," a bar rep told us via text. "It's really disappointing. The bar has been around 29 years as of [Wednesday]. We just celebrated with a Back to the 80s party. A lot of sad people that the bar will no longer be around. It's been a 'living room' for so many people for so many years."

There are no plans at the moment to find a new location.

Public records show that the landlord is Thermald Realty Associates.
Posted by Grieve at 4:28 AM

Email ThisBlogThis!Share to TwitterShare to FacebookShare to Pinterest
Labels: bars, The Edge

Lived around the corner when it 1st opened. Hung out there for a few years. Always a decent place, except for maybe the dartboard being hung a little too near where people sat.

Mainly stopped going cuz i stopped drinking. But it never became one of those ultra hip places, and for that I'm glad.

Sorry to see it go.

This sucks. The Edge was my go-to bar.

I'll buy that SLEEP LATE Neon Sign off them.

Had good times playing pool and darts there. EV just got a little more shitty.

Bars close, people complain. Bars open, people complain. Sun rises, it is due to all of the people who now hate this place and want to (but won't) leave. Sun sets, it is because of all the newcomers who cast a pale over the EV. Ah, another day on the Grieve.

To 5:23 — Members of the Hells Angels on the block frequented the Edge.

You were probably too afraid to enter. So you wouldn't really know who was attracted here, would you.

I wasn't too afraid to enter, but you can think that if makes you feel better toughguy.

I know this place never attracted who I listed it didn't attract, and that's really all that matters.

I never heard of this place PERIOD and I would've at least heard of it, that's how much of a nothing it was to us hardcore punks and the skins, metalheads, and alternative rock kids etc.

Again I could care less that Hells Angels frequented this place.

People want wine bars and high end drinks now.. I have lived in area 20 years and never went there.. young people are not as interested in Dive Bars as they used to be in 60's,70,80's, 90's .. we wanted $5 drinks but these kids have money and want a fancy whiskey or Tequila

And this bar wasn't legendary or special. Not everything that's been around since 198X is. This was an example of that. They never welcomed the artistic, the strange, the musical, despite the name. Oh but they did draw murderous drugs and guns dealing gang members tho.

I was a LES Hardcore kid from back in '85. I hung out in Tompkins, squatted on Avenue C, and panhandled to get into shows (except for CBs matinees there were easier ways to get in there), and yes I did play darts at The Edge. The owner, Mike, was cool, and you could hang out with SVA art teachers, Graphic Designers, Web Designers, Computer Animators, as well as the occasional functioning heroin addict. They had a great jukebox when I was there, Joe Jackson, The Clash, The Jam, Massive Attack, etc. The Gutter Punks didn't hang out there because they couldn't sneak their 40s in.