Exclusive: New owners of John's of 12th Street look to carry on the restaurant's tradition 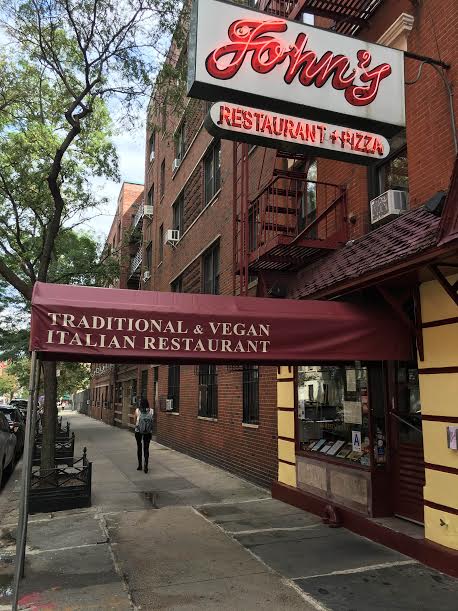 There are plans for new owners to take over John's of 12th Street, the venerable Italian restaurant that opened here between First Avenue and Second Avenue in 1908.

Judy Anderson, whose late husband, Mike Alpert became a co-owner of John's in 1973 along with Nick Sitnycky, confirmed the news.

"Our accountant, Paul Dauber, a long-time friend and customer of John’s for about 30 years, along with his good friend from childhood days on the Lower East Side, Jan Siegel, are purchasing the restaurant," Anderson said.

Anderson emphasized the importance of new owners keeping the spirit of John's alive.

"Nick and I feel strongly about continuing the legacy of John’s of 12th Street and also ensuring that our long-time employees, some of whom have been with us 30-40 years, remain part of the continuing story of John’s," Anderson said. "There is great mutual affection and respect between Paul and our employees, and we are thrilled that Paul and Jan are enthusiastic about maintaining the character of the restaurant. They assure us that nothing will change, and Nick and I will assist in whatever way we can to be sure that the transition will be seamless."

Dauber and Siegel will appear before the CB3 SLA committee on Aug. 22 for a new liquor license.

"Nick and I plan to be at the Community Board meeting in their support," Anderson said.

In August 2014, a deal to sell John's to a team led by Brett Rasinski, who reopened the revamped Beatrice Inn, ended up not materializing.

Q-and-A with Vanessa McDonnell, director of the John's of 12th Street documentary
Posted by Grieve at 4:30 AM

Huzzah! My veal parm fix is safe. Kudos for wines under $30... And a sleeper on the menu, the mushroom sauce over angel hair.

It's a fun parlor trick, tell your dining companions youre clairvoyant and the daily specials will be "avacado bruschetta, burrata, sub dried tomatot raviolio, and branzino with a potato croquette" those specials haven't changed for years.

Long may the new owners continue the vegan Italian tradition!

The have the best Fettuccine Alfredo.

What a relief. My chicken parmigiana will go on. Not to mention my fettuccine carbonara and alfredo. Love that they deliver...

I agree with the comment about accepting credit cards! I stopped going there years ago because of that !

Actually, fettucine Alfredo is named after it's Italian inventor Alfredo Di Lelio. And it was created in Rome.
Via Wikipedia:

"Alfredo Di Lelio invented the “fettuccine al triplo burro (later named "fettuccine all'Alfredo" or "fettuccine Alfredo") in 1908 in a restaurant run by his mother Angelina in piazza Rosa in Rome (the Piazza disappeared in 1910 following the construction of the Galleria Colonna/Sordi). Alfredo di Lelio later opened his own restaurant “Alfredo” in 1914 on the via della Scrofa in central Rome. The fame of “fettuccine all’Alfredo” spread, first in Rome and then to other countries."

Since when Wikipedia a reliable source?

Regardless, John's is one of the very few remaining red sauce joints in NYC and serves of the best fettuccine alfredo.

That comment about John's being a tourist trap is so ignorant. John's is a NEIGHBORHOOD Restaurant that has been a staple for italian food in the area for many many years. Surely, this person is not from NYC!! Love John's!

reading comprehension can avoid a lot of stuff :)

Don't be so quick with the ignorant label. @3.04 was referring to restaurants in Rome, not John's!

I second the wish that they keep the vegan menu items; even Isa Chandra dines at John's!

I've been worried about John's for twenty plus years. This sounds like a good transfer . . . maybe John's will be around twenty years from now.

If you want to get technical about it, pasta was invented in China, so I guess any restaurant that serves pasta in Italy is a tourist trap.

loved myron and john's back in 1981 and 1982. i mean loved. that man is a sweetheart. and the food probably saved my life more times than once.

Yes, Myron was a sweetheart!!!

Yes, please keep the vegan menu! That's what I keep coming back for.
The vegan pizza and ravioli are superb.

My family and I have been coming to John's for many years and Nick one of the owners always came by to say Hi to sit with you for a few minutes and talk and welcome you and it felt like a family restaurant and you loved going there. Unfortunately the new owners refuse to keep up the traditions especially the discount cards that were given out for many years. I came in to eat gave 1 of their discount coupons at the end of the meal and was told by a very rude manager sorry we no longer take those when I said I never heard of that and doesn't the new owner have to follow the obligations of the old owner maybe not give out new cards but honor the ones that are there not tell somebody after they've eaten sorry I cant take those anymore. Very unhappy and it does not feel like the same wonderful place that has been for years.