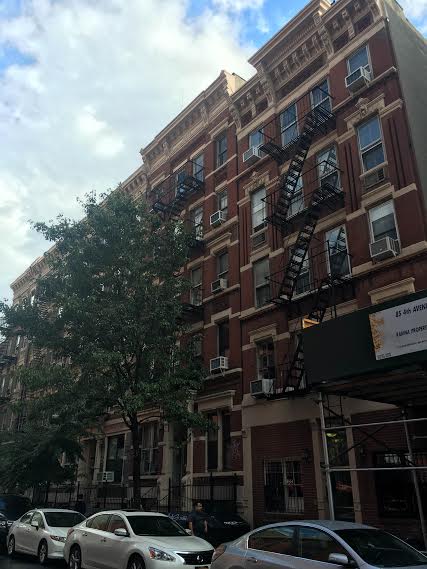 In June, local preservationists made their case to the Landmarks Preservation Commission (LPC) to designate East 11th Street between Third Avenue and Fourth Avenue a historic district.

According to DNAinfo, this effort came about after the neighborhood groups learned in late May that the Lightstone Group had plans for a new hotel on the block.

However, the LPC ignored the request, according to Andrew Berman, executive director of the Greenwich Village Society for Historic Preservation (GVSHP). And, as we first reported yesterday, the Lighthouse Group has filed demolition permits with the city to take down five buildings — 112-120 E. 11th St. — to make way for a 300-room hotel aimed at millennials.

The letter reads in part (you can read a PDF of the letter here):

The buildings in the proposed district are a wonderfully intact ensemble of primarily early and late 19th century structures which are largely unchanged and representative of architectural styles of the era as well as the development of this section of the East Village. Building types within this small section of East 11th Street include tenements, tenementized row houses, a concert hall/community gathering place, a parochial school and a government building. These buildings housed, educated, entertained and served the working class and immigrant residents of this area. Thus the district perfectly captures and embodies the evolution and many facets of working class New York in the late 19th and early 20th century in the East Village.

112-120 East 11th Street
These are five Old Law tenement buildings located on the south side of East 11th Street and built between 1887 and 1892. Significantly intact, they were designed largely in the Beaux Arts style.

We asked Berman why the LPC didn't take any action on these buildings.

"I can only speculate," he said via email. "The LPC does not seem fond of expanding landmark designations these days, especially in Manhattan."

Anything left to do about this potential development?

"We are looking into whether or not every I was dotted and t crossed in terms of requirements for the tenants moving out," Berman said. "And we will continue to push for expanded landmark protections in the East Village, including in the remaining parts of this block." (They helped get Webster Hall landmarked across the street in 2006.)

Lighthouse is reportedly working with Marriott International's Moxy Hotels on the property. Reps haven't filed new building plans just yet. As we noted in yesterday's post, the Moxy website shows a late 2018 opening for the 11th Street hotel. (DNAinfo reported that residents have already been leaving No. 112-120.)

"This could have been worse," Berman said. "Before we got these blocks rezoned in 2010, you actually could have built a much bigger building here, and it would have been more likely a dorm. Don’t get me wrong, this is too big, and it’s bad. It could have been even bigger and badder, so to speak, however."
Posted by Grieve at 4:28 AM

Gee, I wonder why Landmarks didn't get around to calendaring those buildings, even when prompted? Another case of "follow the money" - who might have paid someone to "look the other way" until it was too late to calendar them? Something is very, very rotten about this deal.

This, coupled with the Rivington deal - well, let's just say I won't ever be voting for DeBlasio again.

It seems that NYC is NOT for New Yorkers, it's only for developers and their politically powerful friends.

Andrew Berman and GVSHP should get Nobel prizes for the work they do to keep New York, New York.

DeBlasio is hands down the biggest useless piece of shit in NYC mayoral history, a total nothing.

Seriously, when was the last time you saw this guy hold a press conference? State of the city address? Totally invisible. DeBlasEo.

It's time to get ready for the arrival of the giant geodesic dome by throwing away all our umbrellas and winter clothes. I'm really looking forward now to our sterile, white-washed, climate controlled, soylent green future.

If you think you are safe in your present rental apartment think again. The whole neighborhood is up for sale to the highest bidder. City planning and zoning have been killed for the sake of runaway development. I know that this city is in constant change, been here 35 years and have seen things come and go however change was slow, steady and from within. Today partial to whole blocks are demolished, all traces of a history and past will be gone forever. Soon Las Vegas will have older buildings than NYC. All of this tells outside money that anything is possible here and there is absolutely nobody or system of checks in place if you contribute to enough re-elecion campaigns.

GVSHP fights the good fight and so should everyone else, but the LPC didn't choose this site, and many others, for a reason. That reason is because the city and developers have been and will continue working hand in hand to radically transform this city until it is unrecognizable.

HOW MANY MORE GODDAMN HOTELS DO WE NEED??!!!

the map of the preservation zones was confusing to say the least when it came out.... now its all becoming perfectly clear

It takes just one good man(person) to do something about this assault and all the other attacks on our neighborhood. Where are our elected officials? NOT ONE WORD FROM ANY OF THEM. Why is that? Did we elect Pinochios on the Gippeto Party line. I guess we did. I guess we did.

With every day it becomes increasingly apparent the city is not for actual residents any longer. The rampant overdevelopment will in a not very long time eradicate the majority of the local population. Independent retail business will follow soon after. This is already an encroaching effect, take a look at all the empty retail space now on Broadway between 8th Street and Canal, the once super bustling retail strip of downtown. The fabric of the city will no longer be made of actual neighborhoods. So the only political interests left will not be based on individual voters but consortiums of real estate and corporate interests. When you look into the eyes of your neighbors on your block now you are seeing an endangered species, the average citizen of New York. They are living a way of life that is fading out fast.

Thanks to Bloomberg and now corrupt Clinton crony DiBlasio.

@Shawn Chittle: You are 1,000% right about that. People do not value enough what Andrew Berman & GVSHP have done - and keep doing - for this neighborhood & the city.

@Caleo: I agree with you; they won't stop until NYC is unrecognizable (and unlivable). We are heading for Hong-Kong-on-the-Hudson: maximum saturation of people and buildings with insufficient infrastructure to the point of intolerability.

The city should pass a law that any private owner of property can only sell the property to the City. Then the City must have an ordinance that requires the property to be used only for what it is currently used for. This will ensure things remain the same down the rabbit hole. Over time property owners will abandon the property as water bills and property taxes rise when revenue leads to negative income. Owner walks away and once abandoned squatters can rip out the copper wiring and plumbing soon to be followed by a fire. Fire Department will respond put out said fire level and remove burnt out shell of building as a danger. Then it can become a community garden with fresh vegetables and chickens for fresh eggs running around.

Its been 25 years since I went to HK but I remember it as having great funky districts especially remember Fish Alley.
Maybe its been gentrified too!

Just Tweeted this to Marriott .. they are a midwestern Morman company .. I'm sure they will NOT appreciate BAD publicity from ANGRY New Yorkers!!! Do likewise if you feel so moved!

Thanks Mistah Chittle for Andrew & GVSHP respect. Their newsletter is like a letter from home, if only I could afford to live in NYC again. For those of you still "lucky" enough to do so, their newsletter is invaluable; not only for the historical designation updates, but also for the walking tours they offer, AND their can't-be-beat articles about the neighborhood. That newsletter sign-up is on the left-hand column here:

I can't wait until they introduce their new VR walking tour app ;^)

I look at this as jobs construction jobs the driver of the concrete mixer can feed his family, the mason can work, the supplier of bricks has orders. When done this hotel will provide needed job but no some self indulgent ass-hat is worried about construction making noise as he sips his latte.

I remember that building on the right with the massive cornice, it must have been around 1975 when during my gargoyle collecting days as a teen I happened to see what looked like a typical wooden demolition "bridge" over the sidewalk in front of it, so I went in very early in the morning and removed one of the two red terracotta spandrel panels that had an urn and pair of winged dragons on it from under the window on the 4th floor. Shortly afterwards it became obvious the building was being renovated, they removed the other dragon spandrel panel on the 4th floor under the left bay and inserted air conditioners in the two holes, so that is why those two apartments have air conditioners under the windows through the wall while all the others have then sitting in the windows.