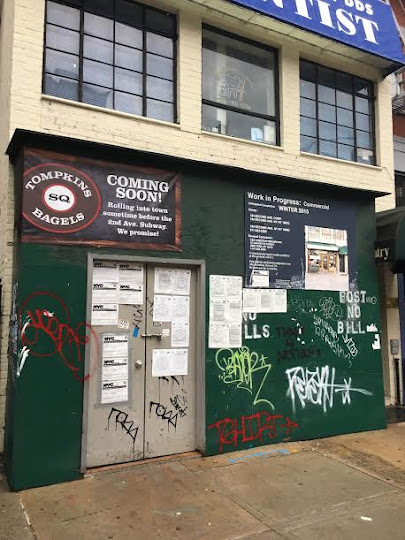 An opening date is within sight for the Second Avenue location of Tompkins Square Bagels.

As I reported late last year, owner Christopher Pugliese's build out got bogged down, in part, by city bureaucracy. As he said in December:

"The killer is, the DOB approved all of our major alterations very quickly," he said. "They came back to us with a list of about 12 minor objections and asked us to make adjustments. Little things like 'move this staircase six inches to the right,' or 'put the skylight here instead of there.' That has been dragging on for months."

However, Pugliese told me on the phone the other day that the brunt of the work is complete. Workers installed the oven last week. Most of the equipment is in. Con Ed has turned on the gas service. 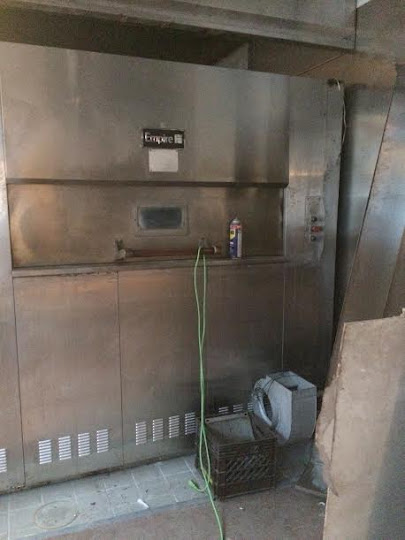 Considering how long the renovations have taken for the former Open Pantry space at 184 Second Ave. between 11th Street and 12th Street, does he even want to offer up a possible opening date?

"We're getting really close. I feel like it won't be any later than Sept. 10-15," Pugliese said. "At this point now I can do the fun stuff, like I'm talking to local artists. I'm thinking about where all the seats will go."

Tompkins Square Bagels opened on Avenue A between 10th Street and 11th Street in December 2011.

"I love my store. I love my customers. I've gotten to know so many great people. I was trying to create the kind of place that I grew up with," said Pugliese, a Brooklyn native.

Nine years remain on the Avenue A lease. However, he has doubts that landlord Jared Kushner will offer him a lease renewal at that time. Which is one reason he scouted for another location.

And he has a good feeling about Second Avenue.

"There's something about that block and the surrounding blocks that feels good — really cozy and comfortable," he said. "And St Mark's Church-in-the-Bowery is there. We lost a church on A, so I'm back even again."

Pugliese also said that there will be fewer menu options on Second Avenue than at Avenue A. "The place is a bit smaller, so that has to be. And we want to speed things up a bit. That's hard when you have such a giant menu."

There will be a few items only available at the Second Avenue TSB, such as bialys ... as well as knishes from Yonah Schimmel Knish Bakery.

"It's the biggest project that I've ever done in my life," he said. "But it will be totally worth it."

The new Tompkins Square Bagels will arrive before the 2nd Avenue subway
Posted by Grieve at 4:30 AM

The DOB points are why I refer to the NYC govt. as Havana on the Hudson. Even Fidel is laughing.

Bill, opponent of the crooks at Havana on the Hudson and the crooks (and aspiring crooks) at Pyongyang on the Potomac.
Anarchy now more than ever!

Owner tells me TSB will open with massive debt because of DOB wait - over 1 year- Wonder if a Starbucks or 7-11 would have had to wait that long ? Seems the city doesn't want places like TSB to exist.

I look forward to the opening - good luck!

Bialys? Yay! How about adding bulkas at some point, especially now that the hip new owners of Kossar's totally revamped (read: destroyed) the age-old recipes handed down to them and made their products, to my taste, inedible?

Looking forward to the opening!

Finally. Hope it's good as Bagel Belly was a big let down.

Good luck! I don't get to the original TSB as often as I'd like. Maybe I can make it to the new one on a more frequent basis.

City seems bent on getting rid of mom and pop. God Bless ya Mr. P. Putting up with a lot of bullshit just to open a humble little bagel shop.

He's right, it's a nice block.

Here we go. I will now come to EV Grieve each day with gleeful anticipation at how many posts will be made about TSB and the comparisons to other members of the bagel family. Which is best, what is the proper temperature of the oven, etc. etc. A welcome diversion from worrying about when the Alamo will be back (chairs and umbrellas appeared today). A welcome diversion from the political mess of the Rivington House scandal. Of course, my thoughts always go back to Bob and Ray, and Mary Backstage, Noble Wife--and the House of Toast. Do you want your toast buttered on the far side or the near. Do you want you TSB with a smear on the top of the bagel or the bottom?

Only thing now about the block is the crazy homeless guy who lives there with half a block worth of trash... Often screams at the voices in his head.

Yeah, but will TSB partner with "celebrity" chefs to have $$$$$ limited-time only designer bagels?

9:25am put a fucking sock in it with your rightwing NYC is a communist state nonsense. It's a bagel place. Another bagel place. Cuz people love to eat white flour and put artery clogging spreads on it.

Bialys? Yay! How about adding bulkas at some point, especially now that the hip new owners of Kossar's totally revamped (read: destroyed) the age-old recipes handed down to them and made their products, to my taste, inedible?

What—are they no longer kosher? Did they add powdered milk? I am so gone from that place.