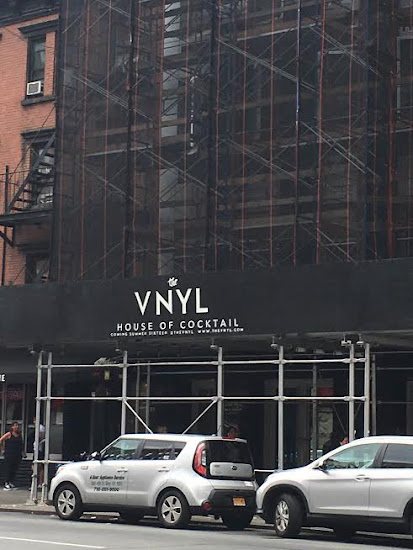 Sidewalk bridge signage for The VNYL arrived yesterday at 100 Third Ave., where a record store/bar/restaurant is opening here between 12th Street and 13th Street... Not much else to note at least from the exterior, other than that the neon sign for the former tenant, Nevada Smiths, has been removed... 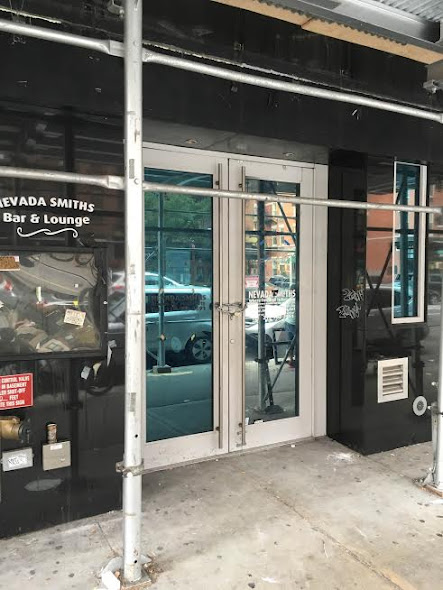 Several nightlife vets, led by James Morrissey (The Late Late on East Houston), are behind this venture, which reportedly includes actor Adrian Grenier as a partner. (New York magazine notes that he is curating the record store.)

The four-level, 7,000-square-foot space with a 1970s theme will feature speciality cocktails and is "designed to attract patrons of music, fashion and art," a source at the restaurant told the Daily News last month.

New York magazine had a few more details on the venture this week. For instance:

Drink: Long Island Iced Teas ($15) on tap; table service where a private “mixologist” crafts a range of cocktails based on your bottle choice (from $300).

The signage points to a summer 2016 opening. There's a teaser website where you can inquire about more information...they also have an Instagram account, populated for some reason with photos of models ranging from Kate Moss to Lauren Hutton...

By the way, The VINYL is not to be confused with VYNL, the rock-n-roll-themed bar-restaurant in Hell's Kitchen.
Posted by Grieve at 4:09 AM

Email ThisBlogThis!Share to TwitterShare to FacebookShare to Pinterest
Labels: 100 Third Avenue, The VNYL

What a waste of space.

oh yeah, this will end well

now I hope that these doofs get sued not only by the real VYNL in HK, but also Mossy and Elle and Winona and Gisele and all the other women whose likenesses they are using in their campaign sans permission or compensation. Seriously, did they just fall off the turnip truck on the Long Island Expressway? You can't just do that!

Curated by that guy from entourage?

Does he need help?

These hacks have to get out of town.

it's so reassurung to know that music, fashion, and art folks have such special cocktail needs that will be fulfilled, and that the requires 7,000 square feet will be provided. i can now relax with this problem solved.

i guess their special needs include chauffers, photographers, assistants and a makek-up room to keep them pretty for the cameras.
will anybody local ever go there?

if entourage is considered a positive it sure speaks of what a waste this entire operation wll be..

"The four-level, 7,000-square-foot space with a 1970s theme will feature speciality cocktails and is "designed to attract patrons of music, fashion and art," a source at the restaurant told the Daily News last month."

Throwing up a little.

Is there an on-line betting site where one could place a bet on how long this horror will exist? I predict a massive redesign of the space, a celebrity opening, lots of Page 6 type stories and then a quick sale to some other group of investors. And then another sale. Each sale /resale making uglier and uglier attempts to attract customers. One can only hope (I have no expectations) that Rosie Mendez and her staff will monitor the impact of this bar-business on this part of the East Village. It is time for our public officials to start speaking out against the proliferation of bars (and businesses hiding that they are really bars) that are negatively impacting the quality of life in the East Village.

There are just so many different ways to pronounce it. It will be like "See you at 'Vee-nills'. Don't you mean 'Vennie Els'? Let's go to 'Ve Niles' instead. Oh, the heck with that, this place right here looks good.".

apropos of nothing, whatever happened to the place called White Noise?

"Designed to attract schmucks who think they're gonna rub elbows with stars of music, fashion and art." Fixed.

I am sooo glad this is coming here! Now I will not have to walk to Tonic or Joshua Tree!

this place doesnt last a year. what a trainwreck. on what planet do $15 iced teas and candied bacon quinoa sushi sounds like an enjoyable thing?

This place is screaming White Trust Fundie Hipster Wannabe Celebrityfucker Douche Playground so bad that even the city's diehard OG white trust fundie hipster celebrityfucker douches will be avoiding it.

If you want a good LI Iced tea on tap, Holiday Cocktail Lounge does it well

Oh! Another douchebag bar! How unique!

If you want a good LI Iced tea on tap

said no one here ever

I get an ERECTION reading about them opening.

How bad was Vinyl on HBO?