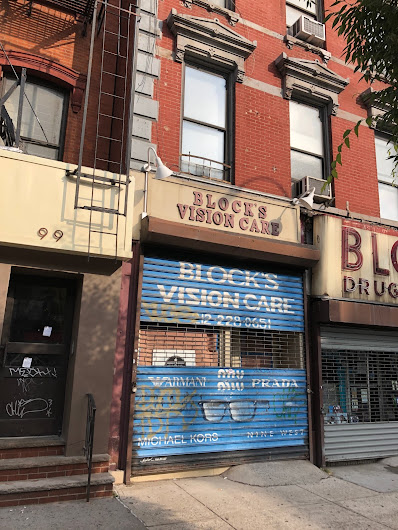 Looks like an outpost of 787 Coffee is coming to Second Avenue.

Signage is up on the former Block's Vision Care storefront here at Sixth Street (this new location is also confirmed via 787's Instagram account) ... 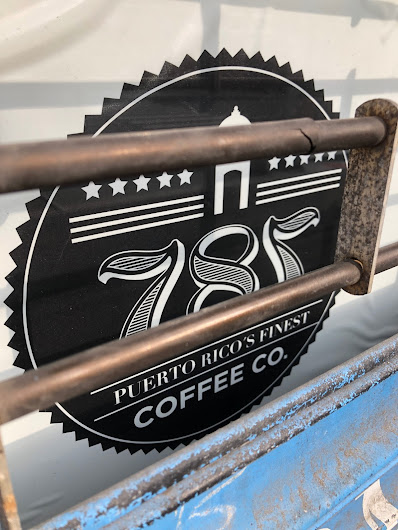 This will be the second East Village outpost for 787, which grows and roasts their coffee in Puerto Rico. The 787 opened on Seventh Street near Avenue A last October.

As for Block's Vision Care, they merged that business into Block Drugs next door back in the spring.
Posted by Grieve at 4:05 AM

This space was a coffee shop for a few years in the late 1990s when there was a dot.com stock bubble. Coffee shop bubble?
I'll do a Newtonian séance with Izzy and see what he thinks....

Also in the mix are tea shops: Spiritea on 2nd Ave and 5th St (between Coffee Project and Southern Cross) and Meet Fresh on 3rd Ave and 6th St. Further up is Mogee Tea on 3rd Ave between 7th and St Marks. Oh, and if we’re counting in 3rd Ave in the coffee glut, there’s Dunkin Donuts and Schmackery...

Why has no one mentioned Porto Rico on St.Marks? It's truly the original E.V, coffee shop!

Isn’t Moishe’s Bake Shop also planning a coffee shop just up the street at 115 2nd Ave? How much coffee do we need in 4 blocks?

I agree 9:42 PM, no mention of Porto Rico?! Easily the best coffee place I've ever been to. Is there any reason to go anywhere else?

This coffee comes straight from their own coffee plantation on the island. Good luck to them.There is always room for eveyone.

GUYS .... 787 has been a great place for coffee in the EV since they've opened .. Authentic Puerto Rican grown coffee from FARM to CUP, NO pesticides and roasted to order .. YUMS!

Porto Rico importing on St. Mark's is a great place to visit if you're looking for a ton of variety in regions or even roasts, but they're tiny inside and sadly they don't have a place to actually sit and enjoy one's coffee other than a random bench outside that is almost always being used...

If you're buying coffee to go or to brew at home Porto Rico's options are good and the pricing is very reasonable. If you're looking for authentic Puerto Rican coffee and a place to sit and enjoy your Cortado then 787 is a great East Village option.