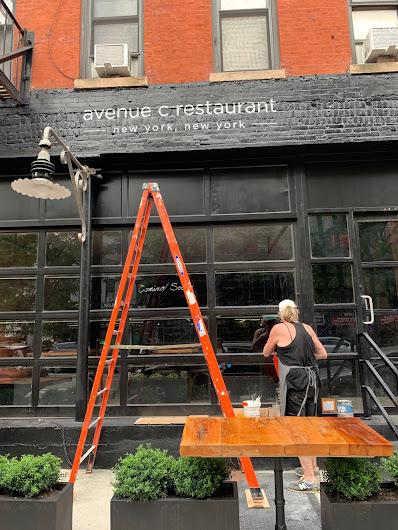 Signage is up now for Avenue C Restaurant, the name of the new establishment that's taking over the former Edi & the Wolf space at 102 Avenue C between Sixth Street and Seventh Street. (Thanks to Vinny & O for the photo from Saturday.)

We don't know much about this venture. In January, an applicant — listed as Rosey Kalayjian — appeared before CB3's SLA committee for a new liquor license for the space in what was described as a sale of assets. The CB3 materials cited the proposal as "an American restaurant" with hours of 11:30 a.m. to 11:30 p.m. Tuesday through Sunday. Kalayjian has previously managed restaurants in Westchester and NYC.

As for an opening date, someone wrote "coming soon" on the front window.

Edi & the Wolf — named for its executive chefs, Eduard "Edi" Frauneder and Wolfgang "the Wolf" Ban — closed in April after nine years in service due to "increasing operating costs," Eater reported.
Posted by Grieve at 4:01 AM

Email ThisBlogThis!Share to TwitterShare to FacebookShare to Pinterest
Labels: Avenue C Restaurant, Edi and the Wolf

Best of luck to this new venture. I hope it's somewhat affordable and has veggie options.

I know the owners and I am very excited to eat at this new restaurant- it’ll be great!

So excited for this new restaurant! Bringing class to our neighborhood. I stopped by to take a peak of the menu, great American cuisine and fabulous cocktails

This place looks so good. I walk past everyday and it went from Sanford and Sons to a beautiful trendy looking restaurant. The buzz in my building is that some Chef from some big restaurant is working here now but a much better price point. Who knows but I must say the place looks amazing!!! The succulents are magnificent and the black mat paint is everything. Kudos to the designers