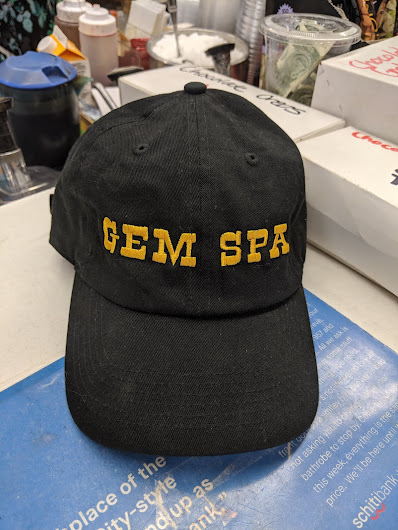 Given the success of its branded T-shirts, Gem Spa proprietor Parul Patel now plans to add to the shop's streetwear merchandising with the upcoming arrival of sweatpants, hoodies and long sleeve tees.

As previously reported, the corner store on Second Avenue and St. Mark's Place as been struggling in recent months, in part due to its six-month ban (set to end soon) on selling cigarettes and lottery tickets.

With the cash mob on Sept. 14 and the interest in the Gem Spa T-shirts, Parul told Stacie that she is feeling optimistic at the prospects of getting through this rough patch.

This is all so sad. I am not encouraged that when they can sell cigarettes again their survival will be less perilous. Sorry--cigarettes as a means of survival? When the end comes for Gem Spa, many of us can think that our purchases of tee-shirts helped if only briefly. We can look back on a business that in many ways helped anchor a neighborhood (I was never a fan of their egg-creams). We can look back on websites of photographs of people known and unknown entering and leaving Gem Spa. Nostalgia is not enough to keep a business going. The current owners have done everything right, but whether the business model that lasted so many years is still valid will be the enduring question. So sad.

@8:46am: Wow, don't be a negative Nellie! YEAH, cigarettes & lottery tickets as a source of survival. Do you imagine that all the local delis & bodegas survive just on selling sandwiches & coffee? Most of them get significant income from selling cigarettes.

PS: As a born-and-bred New Yorker, I say their egg creams are excellent. Gem Spa is among the handful of places that still know how to make them correctly.

I'm wondering what the effect will be on the ban on flavored cartridges of e-cigarettes? Many of the local stores depend on selling them, so we could see many more empty storefronts popping up this fall. Hopefully Gem Spa will be a survivor.

If I'm not mistaken, the profit margin on cigarettes is minimal. Stores usually are selling them to bring you in, in hope you'd buy other more profitable products, like coffee and sandwiches.

Was there today and...CLOSED! Anyone know what’s up?

She has been opening later in the day now. Someone told me she opened at 1 the other day...