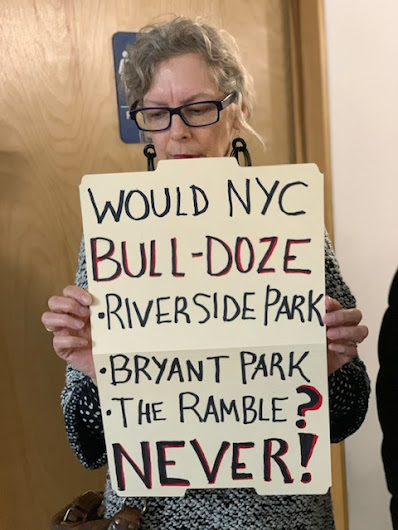 Opponents of the city's plan to demolish East River Park announced details of a lawsuit yesterday in hopes of stopping the project set to commence this year.

The Alienation of Parkland lawsuit was filed by Arthur Z. Schwartz of Advocates for Justice on behalf of East River Park Action, a grassroots neighborhood group, and 90 other plaintiffs.

Here's part of their statement via the EVG inbox:

The $1.45 billion flood control project will destroy the largest park south of Central Park starting in fall 2020. It will take at least three years (but likely much longer considering city’s history with park construction) to secure the neighborhood from storm surges.

Thousands of park users have demanded immediate interim flood protection and a revision of the plan to cause minimal destruction of the park.

The mayor and the New York City Council support the current East Side Coastal Resiliency Project despite vast neighborhood opposition.

“We have to sue to stop this plan. It’s clearly a violation of state law to destroy the park,” says Charles Krezell, who organized the legal efforts with East River Park Action.

You can read more about Alienation of Parkland, the basis of the lawsuit, at this link.

This past Nov. 14, City Council signed off on the hotly contested flood-protection plan that will bury/elevate East River Park by eight feet as part of the East Side Coastal Resiliency Project. The Department of Design and Construction has said that it plans to break ground on the Project later this spring.

Perhaps this lawsuit can be kept in play until a new administration (and City Councilmembers) are in office.

So disappointed in Council Member Carlina Rivera for voting to destroy East River Park! This lawsuit is great and hope it helps.

I agree with all above comments!

I'm not sure that smart, polite and adult pressure on our Councilwoman might make her change her mind. I am going to hand write a letter this weekend to her. Not scream on twitter. She did vote to prevent traitorous cashless business! If she's smart, she knows which way the wind blows and it is not DiBlasio - he is really hated by residents. Go out to Brooklyn and talk to the people who have lived here for more than 4 years, you can feel the anger seething against deblasio and his wanna-be europe surveillance utopia. When it erupts the media will play like they are surprised. Why does his wife get a free pass to lose 800 million dollars?

That sign says it all. Hudson River Park is in the midst of a major upgrade and will lose the tow pound so as to open up the space ever more, while ours gets bulldozed into a pile of broken trees and concrete that in the end, thanks to DeBlasio being more crooked than Lombard Street, will benefit developers far more than the average citizen.

Disgusting vote by Carlina Rivera. YES, flood protection needs to be implemented. But destroying acres and acres of natural nature so build one of your new fake parks is gross. You don't destroy nature to battle nature. Old trees, deeply rooted everything. Figure it out.

Guys, we live in a flood zone... I understand it sucks that we might losing the park for a few years, and would vastly prefer they shut down sections of the FDR instead, but I also don't want our neighborhood completely flooded when the next Sandy hits

How did I miss this.... Carlina Rivera cave to De Blasio and big developers again. She needs to be replaced by someone who has our backs and can stand up against corruption.

In other related news...

“Just days after the Earth saw its warmest January on record, Antarctica has broken its warmest temperature ever recorded. A reading of 65 degrees was taken Thursday at Esperanza Base along Antarctica’s Trinity Peninsula, making it the ordinarily frigid continent’s highest measured temperature in history.”

Whoever decided that burying the park under 10 feet of landfill was the best solution isn’t paying attention. It’s estimated that if the Antarctic ice sheets melt, the oceans would rise by over 200 feet. Even if they just melt by a fraction of that, by 10%, this dirt barrier will wash away like a sandcastle, as will much of Lower Manhattan. It’s such a foolish waste of time and money to try to save a park that will either be completely submerged along with the rest of Manhattan, or if the predictions are wrong, it won’t. Whether you believe in the science and climate predictions or not, this is a gigantic waste of money and an unnecessary destruction of a beloved park. Let’s not destroy it and enjoy it while we still can.

Are... I’m sorry, but are you all nuts? We need flood protection! How does this benefit The Developers? Art Fucking Schwartz? Are you kidding me? This is the most idiotic knee-jerk reaction I’ve ever seen. Save the trees? What are you, cognitively challenged Druids? The trees are toast the next time the East River washes in, which could be any day now, the way things are going.

The same law they cite in the lawsuit link prevents selling park land as well without legislative action. Developers have nothing to do with this.

We can't have another hurricane sandy. Please build the structure! Yes it will be a inconvenience for a little while but I rather that than suffer through another sandy. It will happen again, its just a matter of time.

Funny on the West Side Hudson River Park where there is already massive lux development in place, no "we must destroy the park to save the park" solution for Sandy like storms.

On that note, notice the 3 posts supporting this abortion, no mention of the actual legal merit of the lawsuit, classic deflection.

As an east 11th street resident with a home that was under water during Sandy, I urge you all to think of your neighbors and let the work begin. Worrying about it not finishing on time? Filing lawsuits will guarantee that outcome. Help us!

The bigger issue that doesn't get discussed much is "it won't work". That water, if it comes, will go somewhere. There are no good options for flood control. Take the money, seriously harden and waterproof where possible the infrastructure underground and get used to the new normal.

The powers that b(e)ought DeBlasio years ago know this. It's just a cash grab. I'm going to write to Cuomo as he hates DeBlasio and will be in office longer. I'm fine with developer corruption, it's practically been in the city charter since New Amsterdam, but let the park lose to the Atlantic on it's own. You can't stop the ocean.

Folks need to go back and watch that PBS special on The Big U. Many experts said this plan will not work. The water needs to go somewhere, and walls are notoriously susceptible to failure during major flooding. The Big U only needs to fail in one place for all of Lower Manhattan to be flooded. It is possible to ride a flood out if your infrastructure is ready for it. Other cities have put in place underground garages which are designed to flood and keep street level flood levels down. They have also made their electrical systems more flood proof, so residents don't need to flee their homes or suffer through a week long blackout. They also put in backup generators for essential services. This low tech billion dollar dirt pile does none of these things.

I am looking at the NYC Flood Hazard Mapper and it shows a slew of V Zones--the most hazardous potential flood areas--including the entire west side of Manhattan. I am hoping that 4:22 pm (Will), 8:44 pm, 8:17 am, 5:51 am, or other supporters of the park elevation can explain why the lower east side needs this construction but other areas of the city apparently do not.

"As an east 11th street resident with a home that was under water during Sandy, I urge you all to think of your neighbors and let the work begin. "

I guess you haven’t been flowing current events because there was Sandy flooding plan which had major community input that was thrown out for this REBNY supported piece of dirt. Again, your post is classic deflection, meant for the ill-informed.

The point is, build a fucking 10 foot ivy-covered wall along the FDR where the current barrier is. You don't even need to shut down the FDR for that, because there is a wide paved path on the other side of the DDR. Shouldn't be this dramatic.