Report: Target will replace the Food Emporium in Union Square — in 2023 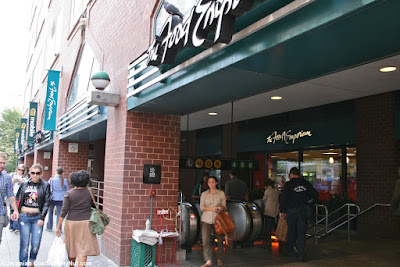 ICYMI: Lois Weiss at the Post yesterday reported that Target is taking over the Food Emporium space at 10 Union Square East in the base of the Zeckendorf Towers. However, the takeover won't happen until 2023.

While Target has just signed a lease for 32,579 square feet at 10 Union Square East, the space is still occupied by the Food Emporium until the end of April in 2023.

Despite the wait, sources said Target wanted to lock in the location along East 14th Street. The nearly 16-year lease had an asking rent of $183 per square foot.

This will mark the departure of yet another traditional grocery store in the area. Associated closed on 14th Street in Stuy Town in December, a location very close to the Target that opened in July 2018.
Posted by Grieve at 4:21 AM

What is this crap reduplication of chains on 14th? Two Trader Joe’s, now two Targets, and we lose two real food stores. Wonderful.

The fact that we're losing yet another traditional supermarket is indeed disturbing, but that said, Food Emporium has been a disgusting mess ever since it was taken over by Key Foods: Products being sold well after expiration dates, especially dairy; Frozen food visibly melting and oozing out of soggy boxes; Increasingly poor selection of products; Filthy carts, baskets and shelves...

I feel bad for the checkout staff, who are very nice people, but it's been clear for ages that store management simply doesn't give a rat's ass. Maybe if the store had been (MUCH) better run, it would have remained competitive? Who knows in today's retail environment. I also worry about shoppers who rely on EBT - does target accept it for groceries?

Nooo! This one of the better grocery stores in the area.

Am I the only one who finds Target useless? Everything in there I can find someplace else for better quality and shopping experience. Their stores are depressing and don't have much selection. For non-grocery items, I find Kmart and BB&B much better (although still big chains).

Do Target's have grocery sections now?

Wait, isn't there a target like 2 aves away from here already?

Gros, to serve the tech hub bros by that time who wont have to buy viagra or shaving cream south of 14th

The target on 14th is a failed experiment. The shelves are always bare and they have pallets on the floors all the time. The staff have told me they hate it there. It’s complete chaos most of the time. I gave up and stopped going. I live 1 block from there but will got out of my way to avoid it. Do not believe the google reviews, the shelves never look like that and they allow dogs around open produce, TJ’s doesn’t not becuase I believe it is HC.

Nothing but bad experiences at this Food Emporium. Huge selection but low quality, and short lines but checkout somehow still takes forever.

For better or worse Target seems to be transitioning into a grocery store.

That food emporium is extremely over priced for low quality goods. I can tell none of you complaining have ever been inside of Whole Foods or tradwr joes simply because “it’s a large chain”. Cut the crap. Stop giving your hard working money to horribly ran stores with extremely low quality product. Since Whole Foods is a large chain, they are able to get better products for less. Don’t bash these stores simply for being a large chain when in actuality they have great products for competitively low prices. It’s mind blowing how many people support this food emporium aka a poor excuse of a grocery store just because “it’s small”.

Sadly, shopping at Whole Foods is shopping at Amazon, which is like giving your money to Standard Oil.

These companies got big because they are good at what they do. Trader Joe’s etc. Key Food I general is a lesser quality chain.

I ate hot food from the food bar once at Food Emporium and became very ill, never went back. This was a couple of years ago so I guess that coincides with the Key Food takeover. Target on 14th/1st is great, a real convenience and yes, they sometimes run out of stuff but if you go early it's all good.

@11:44am: Sure, go shop at Whole Paycheck if you want Jeff Bezos to take over the world. He doesn't get my money, though, on principle.

As to Target, it could not be more blandly corporate, but it's so, so suitable to "midtown south".

Well said, Kel. It's wild to see comments on here angry that TJ's replaced Associated - regardless of being a national chain, its a drastically better experience by every imaginable criteria. And let's not act like these are mom & pop local business that are being replaced. A second target in the area seems unnecessary, but no more so than another mediocre supermarket.

Something new to vomit in!

Age of mom and pop stores have been over a long time ago. Now we want or grass fed organic beef and our free range eggs to be fresh and available 24 7. Then we want a beer from a micro brewery from Colorado followed by a inexpensive bottle of wine from France. Most of the produce 29 years ago came from a handful of farms now consumer is much more sophisticated.

Whoever stated that Trader Joe's doesn't allow animals must have never been in one. ALL of them seem to allow people to bring their Pups into the store. A complete VIOLATION of the Health Code that Management there never enforces!

Rather it's that bro's get everything delivered, whereas apparently only old folks actually SHOP for their groceries and cook at home.

10:59 you must not go to TJ's too often. Plenty of people bring their dogs to TJ, very,very common. Perhaps you should rethink TJ as well

Yes they do. I believe it is required by law. Walgreens,7-11, CVS, Duane Reade all accept EBT as do all traditional super markets.

Grocers are being hit very hard over the last few years. Associated, Food Emporium, and Fairway as well as larger regional/national chains like Save-A-Lot, Earth Fare, Lucky's Market, to name a few. It's generally the same story: overlevered, sometimes PE-backed, higher labor costs (thank NYC liberals for that!), higher food costs, higher freight costs, rapid expansion into uber-competitive and saturated markets, significant capital expenditure costs (delaying of such causes stores to become decrepit like Emporium), etc. Grocery is a thin margin business, and when you're in competition with DTC grocery delivery (which isn't doing well either, see Hello Fresh and Blue Apron) as well as with Amazon Fresh, Whole Foods, TJ's, and others, it's not a surprise to see beleaguered grocery chains fail. I think we will see a whole lot more store closures and chain failures/consolidations in the near future especially in a general market downturn.

This is a shame. Their bakery has made every birthday cake my kids ever had and they do a really nice job.

What can happen with the multiple locations of Target and Trader Joe's are they can let the customer determine which of the two stores end up staying when each lease is up or renegotiated.

Trader Joe's will not end up having two stores on 14th St, in 2-3 years unless their customer's supply so much business to justify it. It would not be in the plans though.

Target seems to have done 1/2 the experiment with very East 14th St store, but did a preemptive strike on the Food Emporium space as soon as that lease was an option.

If by some chance Whole Foods could also justify a 2nd store very far east, I bet they would try it too, although I can't see them give up the Union Square presence no matter what.