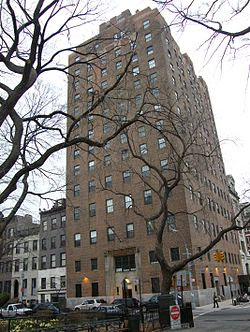 As we wrote about yesterday, someone in the Christodora House on Avenue B and East Ninth Street has twice removed the in-progress nest that red-tailed hawk parents Christo and Dora were building on a 7th floor AC unit. (Someone also installed bird spikes and tried to construct some kind of slanted cover for the top of the Act to prevent the hawks from landing.)

The hawks nested in the same place last year ... which netted three offspring.

Legalities aside, here's one solid explanation behind someone's actions. A tipster tells us that the Christodora is about to undergo a two-year renovation project that will cover the entire building in scaffolding and construction netting.

According to the DOB, the city OK'd a permit for exterior repairs last Wednesday. The estimated total cost of the project is nearly $2.5 million, per DOB records. Douglas J. Lister, Architect, is listed as the architect of record. (The firm's specialties include exterior renovations and window replacements.)

As the tipster said, by preventing them from nesting now, they are actually being more humane than letting them build a nest and then destroying it with scaffolding. The hawks will need to find a new nest location.

DNAinfo filed a story this afternoon with more details.

Property manager Debora Angelico said the nests were removed so that the air conditioning unit could be repaired. The owner of the seventh-floor condo ordered the repair, she said, but only after months of research, which included outreach to the Audubon Society, the United States Fish and Wildlife Service and the condominium board, she said.

Although some the birders expressed concern that nest removal was illegal under federal laws protecting birds, Angelico said the U.S. Fish and Wildlife Service told the owner he was allowed to remove the nest from September through April because the raptors do not mate at that time.

Angelico said that the two-year renovation will commence in April.

VIDEO: Watch the baby hawks of Tompkins Square Park dine on some rat

Someone keeps destroying the nest that the red-tailed hawks are building on the Christodora House
Posted by Grieve at 5:05 AM

This sounds reasonable but I wonder how soon is soon in regards to the renovation work? This building is that tallest around the park and I imagine the hawks chose it for a good reason. Looks like Christo and Dora will have to move to another park this year.

Awesome, at least the scaffolding will prevent those of us with kids on the block from being hit by falling air conditioners

"About to undergo" - as in this month, next month, or in June?

Because by June the fledglings are off the nest, and Christo & Dora have all the time in the world to build a new nest elsewhere.

Right NOW, though, the hawks need a nest for Dora to lay her eggs.

Fine, Olympia: end of June or 4th of July, then! I asked a straightforward question, which has not yet been answered.

Dora is probably ready to lay eggs, so what does everyone think will happen without a nest? Unless someone has seen them choose another nest site...

Grieve, can you explain the "someone removed" thing? Isn't this an apartment that someone lives in -- therefore any nest removing would be done by the person whose window it is?

Some of us in Hawkland are confused!

It was unclear who, exactly, has been removing the nests. A resident of the unit? Or was it someone from maintenance? Or both!

DNAinfo has a followup story this afternoon, where they report:

The owner of the seventh-floor condo ordered the repair[on the AC unit], she said, but only after months of research, which included outreach to the Audubon Society, the United States Fish and Wildlife Service and the condominium board

Even the hawks are getting the boot!

Hmmmm...since the building is a condo, the air conditioners are the property of the unit owner. However, most condos and co-ops don't allow residents or owners to install or remove A/Cs by themselves. (Cuz of the aforementioned flying A/C problem.) They have to use certified installers, often provided by the management.

That said, it's still unclear who actually removed the nest. I know someone who used to work for Central Park zoo, and they would sometimes be sent to remove nests and birds.

"Angelico said the U.S. Fish and Wildlife Service told the owner he was allowed to remove the nest from September through April because the raptors do not mate at that time."

I call shenanigans! Is the US Fish & Wildlife Service out to lunch, or did someone mis-hear? Red-tailed hawks typically mate in December/January, and then need a nest in which to incubate the eggs. It's inaccurate to say "raptors do not mate at that time."

The time when the nest would NOT be in use would be from when the last fledgling leaves (usually June or July, though sometimes as early as late May) until the following February.

reason why someone may not want the red-tailed hawks to nest on the Christodora House is because they are not white-tailed hawks, right Moe?

It's never a good idea to give names to wild animals.

We removed the nest, and we'll do it again.

I agree..even the hawks are getting the boot.