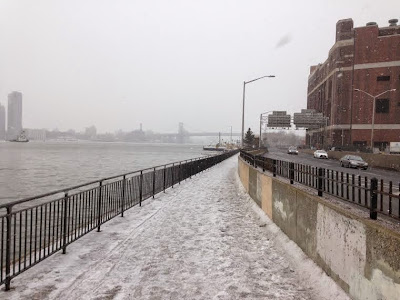 [Along the East River yesterday via EVG reader Brett W.]

The founder of Economy Candy has died (DNAinfo)

A list of classic things to do, or not, in NYC (Flaming Pablum)

Morlock is a New York-based painter who says she "draws from the irony and wit conveyed in the fashionable New York subculture" for inspiration and also serves as art consultant for "The Daily Show."

With the existence of the art community in the East Village continually under siege by such factors as rising rents and corporate sprawl, Pangea remains an oasis for authentic artistic expression. "Pictographic" is the second permanent installation the almost 30-year institution has commissioned, joining a "pouring" installation on the ceiling by William Engel, a long-time faculty member at New York School of Interior Design,

The event is free and open to the public with a cash bar and complimentary hors d'oeuvres from 6 to 8 p.m. Northern Ireland native DJ Pete McGill will provide the soundtrack for the evening. 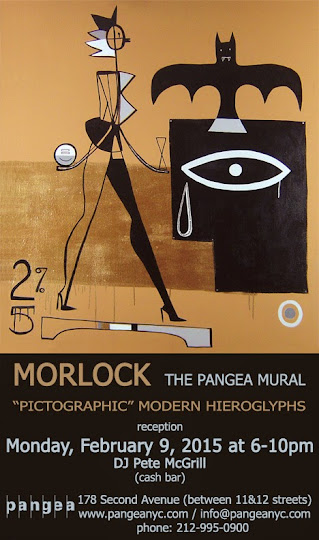 The art community was a key player in the early gentrification of the "East Village". ABC NO Rio has a lot of good information on this topic.

SMDH is up early to troll I see.

It's happening in London too... MOurning loves company:
http://www.theguardian.com/commentisfree/2015/feb/06/death-bohemian-london-12-bar-club-squatters#comment-47271671

Of course ABC No Rio started the whole thing, after, ironically, putting together a "Real Estate Show."

Blaming gentrification on artists is too simplistic. The average artist has a low income and isn't necessarily white. It's city gov't, real estate, and banking interests that market and zone neighborhoods like the EV to attract the $$$ed people.

way to go, jay!!! you deserve every penny of that!

"No matter how thoroughly obscured by the art world, the role that artists and galleries play in the gentrification of the Lower East Side is clear to those who are threatened with displacement, as well as to the community workers who are trying to save the neighborhood for its residents. … It is not a case of mistaken class identity for the people of the Lower East Side to place artists among the neighborhood enemies. For despite their bohemian posturing, the artists and dealers who created the East Village art scene, and the critics and museum curators who legitimize its existence, are complicit with gentrification on the Lower East Side."


The rest of what you wrote, I agree with.

Yeah, art is bad, and we shouldn't have it anywhere!

Pangea is a great neighborhood restaurant

I hope you're not trying to suggest that Rosalyn Deutsche and Cara Gendel Ryan are not also responsible for the gentrification you site. They most certainly are (as well as NoRio).
Art immigrants, all.

The very last time I picked up a lady and was persuasive and young / hip enough to entice her to spend the night with me was at Pangea. I'd be sad to see it go. But, like everything else, things change. People get older...places fall out of favor...memories disappear by the wayside. I'm sure I inflicted a sense of displacement to the people who were living on my block before I moved in. At that point, I was the leading edge...now I've become the trailing edge. It's how things go.

That was the thinking in 1987. Nowadays the thinking about artists-->gentrification is less clear. Research shows that there are some artists (commercial -esp film and advertising) who do gentrify, but others like low income dancers, choreographers, photographers and not-name painters who tend to fit in, becoming part of the existing community and revitalizing it. In less major urban areas, artists have no gentrifying/revitalizing effects at all.

This is all about decisions made by the city (and developers and bankers).