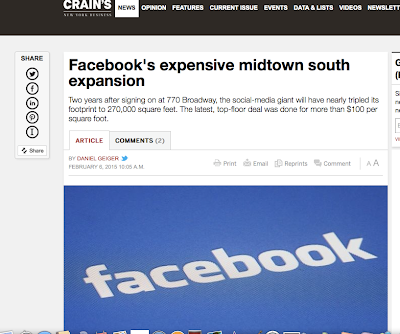 Report: Maps show that Midtown South does NOT include the East Village/Astor Place
Posted by Grieve at 12:08 PM

Now I know why my real estate taxes have doubled over the last four years.

Hmm. Hard to tell if the writer thinks he's being "edgy and cool" or if he's just an idiot about NYC neighborhoods.

Anon 12:31
you must be a first time visitor if you don't get what "mid-town south" is all about.

Facebook is my least favorite company in the world, it beats out Halliburton. Most Americans have no problem posting all sorts of private and personal information on their pages which has been a gold mine for scammer and online advertisers. Going to a job interview, make sure you clean up you Facebook page before you do because your prospective employer will be checking out. Delete those pictures of you passed out drunk and those tramp stamp tattoos. Your info is minded and sold to advertisers directly so expect subscription offers from those cat enthusiast magazines any day now.

Facebook is the NSA people voluntarily give all of their information to.

We're all going to regret making fun of 51 Astor when the sentient data centers stored in these social media corporate headquarters come to life and try to take over the city and only IBM Watson can rise up to save us like a benevolent Gamera defending humanity in a Japanese monster movie.

Why they need so many employees? It's a boring site. Majority of the content is provided by users. $200BB? How does that work? Hmm, must be all the advertising and marketing shenanigans. Listen up people, Facebook is in the business of gathering your personal info and selling it to marketers. That's all they are interested in. Shameful stuff really. News flash, one doesn't need Facebook to communicate on the internet. It's today's version of AOL. The internet is such a powerful medium, yet people stick to the "safety" and familiarity of filling out Facebook forms when they want to interact with friends and family. Sad.

If there is a shred of dignity left in this neighborhood, and I am not sure there is, the influx of Facebook fuckface employees is sure to annihilate it. The East Village is officially the domain of the man now.

just an fyi to all first and non-first timers - "mid-town south" is a police term.

People toss around the term *gentrification* when much of the time they're talking about *revitalization.*

@ 12:51
No, not at all.
Only us "edgy and cool" people would ironically refer to this neighb as midtown-south. Was wondering if Crain's writer thought he was one of us cool kids.

It's bizarre that FB would need so many employees, given that they make it impossible to actually reach a real human there for any purpose whatsoever!

So now we'll get the onslaught of the mini-Zucks, all of whom will be as entitled and clueless as the man himself. Truly, there goes the neighborhood.

I liked it way better when nobody from "uptown" would bother going anyplace below 14th St.

When are they going to start using us as guinea pigs for more mood manipulation studies?

In case anyone forgot what the new names are for the area formerly known as the East Village, here's a little refresher:

ZuckerVille: where Mark Zuckerberg lives, right next to FarmVille.

BroHo: in honor for the residents who have recently moved in from places like Ohio. As in, "Yo bro, you seen my ho?" Also known as WooHooville.

Stuyversy: The merger beween Stuytown and Gramercy into one giant neighborhood with lots of trees, no stores, and thousands of drunk NYU students. You'll know you live there when they raise your rent mid-lease by 50% and you have to move out.

CitiBike City: for the place formerly known as Alphabet City. Avenue A will be Adventure Avenue, B will be Bankster Boulevard, C will be Cupcake Drive, and D will still be Avenue D, since no developer can ever seem to figure out how to gentrify it.

giovanni, that was hilarious

Anon 1:15
Your mother wears army boots, since we are sunken to schoolyard insults.

San Loco is the only reason I go into the so-called East Village.

'Area blows, has blown for years.

Please open a place west of or even on Broadway so I don't have to go east of it, San Loco.

Oh man, Facebook sells ads against the user info it collects... so terrible and so much different than any other website!

I like Facebook. It lets me keep up with family members, plus I get a lot of good recipes, and cute pictures of cats.