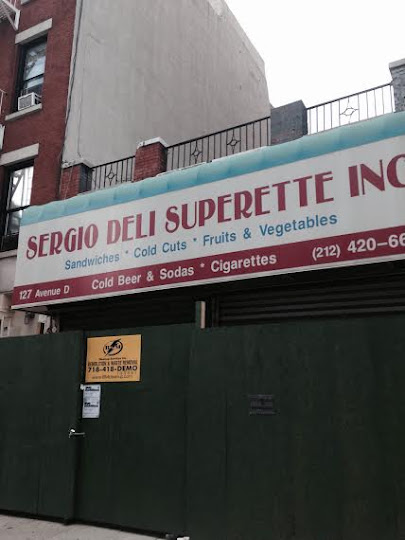 The demolition of the former Sergio Deli Superette on Avenue D near East Ninth Street has started.

Plans call for a 7-story mixed-use building ... the approved permits show 11 dwelling units with a commercial space on the ground floor.

BuzzBuzzHome previously reported that the developer is H Holding Group, whose projects include four luxury townhouses on Degraw Street in Boerum Hill.

And here's a rendering of the all-new 127 Avenue D via the H Holding Group website... 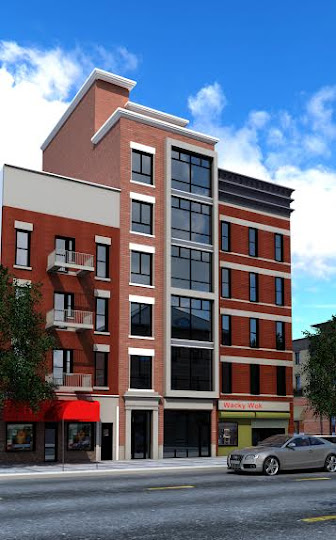 Previously on EV Grieve:
On Avenue D, Sergio Deli Superette will yield to a 7-story building
Posted by Grieve at 4:30 AM

I hope the commercial space is a Marc Jacobs boutique so my chauffeur won't have to drive me over to the West Village anymore....

Another glass...oh wait, there appears to be some brick-work. That's a check in the plus column for me.

So what happens to the windows on the south side of the corner building?

All these new condos feature floor to ceiling wall to wall front windows that give the people living in them no privacy at all. Not grokking the appeal.

@Anon. 10:20, what will happen to them is what happened to the east-side windows of 533 East 11th Street when the Spink Apartments went up in the empty lot next door - the new building was built to within 6 inches of 533's exterior east wall, cutting off all light and air to the apartments on that side of the building. When the old 535, twin to 533, was still standing, they shared a fairly nice-size dumbbell-shaped air shaft, but what the hell, poor people don't need Vitamin D and ventilation, right?

@Gojira, that's horrible. I live in that building and that is the only wall with windows to the hallways of the building. If my downstairs neighbor stinks up the whole building now, I can only imagine what it's going to smell like once we can't get any fresh air.

Buildings throughout the City have been constructed over many, many years (over the course of the City's history, really) next to others in a way that block windows. I agree it sucks when it happens (I used to live in a building where this took place) but I don't think it's so unusual nor, in my view, is it a "poor people" thing.

The "New Law" tenements (after 1901, I believe) were required to have light wells and windows in every room... I lived in one of them for 22 years. Now I'm in a cube-shaped building that has an interior courtyard, so interior apts. have light and air.

How is it possible that 100 years of legislation has gone by the way? Oh yeah...