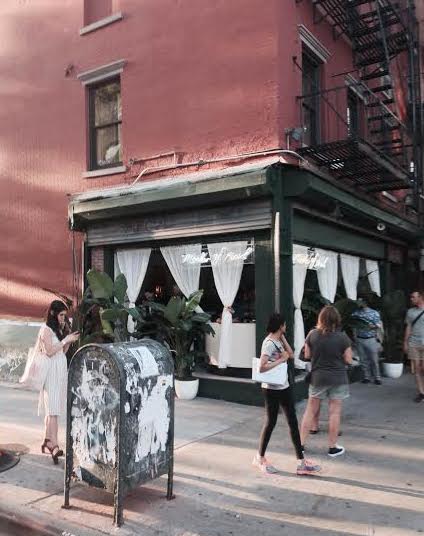 Several EVG readers have pointed out that the northwest corner of Avenue A and Sixth Street has a new look with the (soft) opening tonight of Mother of Pearl.

Owner Ravi Derossi's tiki-influenced bar replaces Gin Palace, one of the three bars (along with Cienfuegos and Amor y Amargo) that make up 95 Avenue A. The Gin Palace space was reportedly gutted during building repairs in late 2014 and early 2015.

Mother of Pearl officially opens tomorrow night. You can read previews of the place at Zagat and Eater. 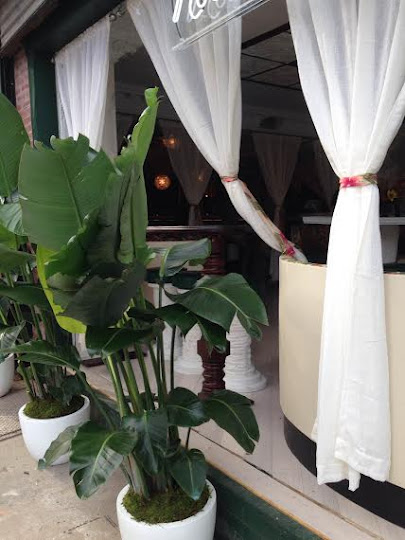 Here is the menu via Eater...

Previously on EV Grieve:
The 'Postmodern Polynesian' of Mother of Pearl replacing Gin Palace on Avenue A
Posted by Grieve at 7:53 PM

Email ThisBlogThis!Share to TwitterShare to FacebookShare to Pinterest
Labels: 95 Avenue A, Cienfuegos, Mother of Pearl

A bar replacing another bar, isn't that nice.

Walked past, and to me, the crowd inside just looked so desperate to be cool. It was kinda laughable...

I will sell my mother's pearls to buy a drink.

Such a joke. Top of the line hotels can demand those prices. Not here. Jesus, this is way wide of the mark. That 4 block stretch of A is the pits to walk through, it all hurts. Also there's barely any booze in those drinks. Proper polynesian painkiller drinks are loaded with different boozes and are okay to be $16-$20 because you shouldn't have more than 2. This menu? Hah! Weak ass $20 drinks. Next!

How long before they drop the food and become just a flat-out bar, I wonder...

I don't know, $20 cocktails on Avenue A is a new low, but I don't doubt that there will be many takers, given de Rossi's reach in the neighborhood.

I'm sure I will be in the minority about this given the noise level of a bar that's open to the street, but I'm glad that his latest bar shows its face to the world instead of being hidden behind a blank wall as Gin Palace was. That made the corner so bleak, especially since the closing of Benny's.

And am I the only one who still misses Pisces? Early gentrification now seems to charming and relatively harmless...

Uh, try $20 cocktail. May they join Black Rose on the pyre

I need a clearer representation of the Drinks menu. I'm very particular when it comes to my cocktails. Does that say $ 15 or $ 25 for one of those cocktails...oh well, never mind. I'll make my own.

What's the opposite of a soft opening? A hard closing ?

Provided they don't have outdoor seating I don't care. I didn't go to Gin Palace and won't go here.

Yes Pisces is missed. I also miss Dolphin on Ave A between 8th and 7th street from early eighties. Early gentrification was about a chef bringing to the public a new food place or making their mark. Now of course all about the Benjamins and booze sells. What does their CB SLA approval mandate? What time are they supposed to close windows and do they have phone number for public noise complaints, etc.? When will they go for outdoor seating license?

"I'm sure I will be in the minority about this given the noise level of a bar that's open to the street, but I'm glad that his latest bar shows its face to the world instead of being hidden behind a blank wall as Gin Palace was. That made the corner so bleak, especially since the closing of Benny's."

This, a thousand times. I live next door and can deal with the noise (I think). The aesthetics of Gin Palace, however, I could not.

When I walked past this yesterday afternoon my only words were "the fuck is that?!" That white decor... It's not a beach in the Mediterranean; it's Avenue A.

The decor is really tacky, and we're worried about the noise level, given that it's open to the street and we live extremely close

Can we stop using "soft opening." I am waiting for a finale that never seems to arrive. It is nerve-wracking.

Another wistful vote here to bring back Pisces. If only.

Thanks. I'll go to my Polynesian joints in Jersey where a Mai-Tai will set you back about $5.75.

The facade is nice, but this place is a fucking fortune. This ain't Wall Street.

Where can I find a decent burrito?

I am dismayed by the amount of hate for Midtown South on this blog.

Pisces!!! I bartended there in the 90's. That place had great food but it was so tacky. The owners bought all the decor from an old seafood restaurant in NJ. The raw bar display was made of plastic fish, lobsters and clams. I used to have to crush buckets of ice to keep the fake seafood chilled. Hilarious!

and i was just getting used to $14 cocktails. holy shit.

Maybe they are priced that way so happy hour will seem reasonable (50% off!) and never ending.

Fuck that. I refuse to pay that much for a cocktail. I would rather pay 20 for the ingredients and make the drink myself. But I guess at 40, I am now an old fart and don't belong with the bros and hipsters that now make up this demographic. Pretty soon, most anyone who lives and works here, will need to bring in at least 150k just to survive. Sad. Sad. Sad.

Are the cocktails served in a conch shell I can take home?

they have dropped the prices to $15 this week, so it's getting more in line with the neighborhood