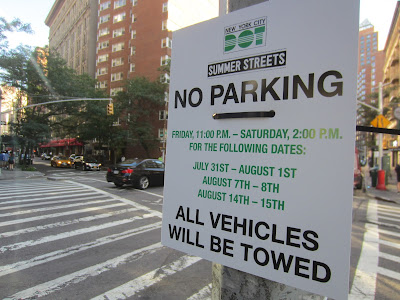 In case you missed this news from yesterday… Summer Streets start next Saturday, as the headline implied…

Here's the official Summer Streets About:

Summer Streets is an annual celebration of New York City’s most valuable public space—our streets. On three consecutive Saturdays in August, nearly seven miles of NYC's streets are opened for people to play, run, walk and bike. Summer Streets provides space for healthy recreation and encourages New Yorkers to use more sustainable forms of transportation. In 2014, more than 300,000 people took advantage of the open streets.

Held between 7:00 am to 1:00 pm, Summer Streets extends from the Brooklyn Bridge to Central Park, along Park Avenue and connecting streets, with easy access from all points in New York City, allowing participants to plan a trip as long or short as they wish. All activities at Summer Streets are free of charge, and designed for people of all ages and ability levels to share the streets respectfully. 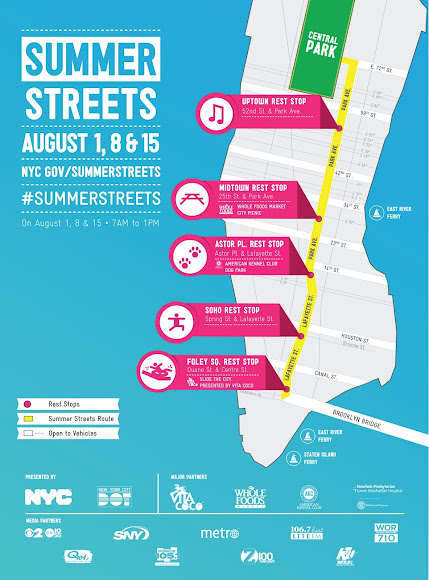 And the pièce de résistance this year? A giant water slide in Foley Square via Slide the City… 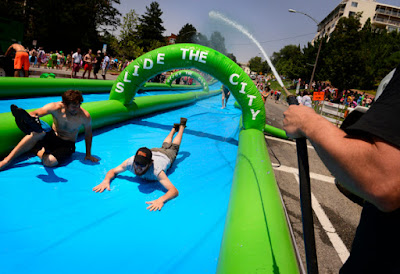 Please note that you have to wait 30 minutes after eating before sliding.
Posted by Grieve at 9:55 AM

How many surveillance towers are they setting up?

The provide free flouridated water! All the toxified water you can drink!

The slide looks fun until you read the fine print that you have to pre-register, show up for your slot a half hour in advance, and are not allowed to register on-site. Fuck that!

Used to be cool before everyone found out about it. Now its too congested for its own good. Kind of defeats its original purpose. If you ask me they could do well by expanding it.

This event is a good thing...

This entire event is an over-crowded cluster fuck under the sizzling sun. I'd rather be in the clean confines of my air conditioned apartment. But, to each his own...

It's actaully a lot of fun, but it is much more crowded now that anyone can grab a CitiBike at the last minute. The key is not to ride with the packs that stop at every red light, just speed up or slow down to stay in between them and you will have plenty of room to enjoy the ride.