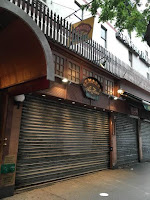 No official word about what will become of the prime space here at Third Avenue. There's a rumor that the owner is going to reopen the place as a Greek restaurant.
Posted by Grieve at 4:25 AM

Real classy owner to keep his staff in the dark.

Boycott his new place in this space if he opens one.

A new building application has been filed, demolition of existing structure proposed.

A truly terrible thing. You will be missed SMAH.

From all your J15 boyz

Google Street View below shows 2 St.Mark's Place is part of the building which houses Aria Body Piercing, Ray's Pizza Bagel Cafe, and St.Mark's Hotel which means RIP to all three and everything else in that building on the Third Avenue side as well as St.Mark's Ale House.

So the first step towards demolition has been taken.

The new building application was last disapproved in March 2015. There hasn't been any other activity on this. And there isn't a demo permit on file yet at the DOB.

Oh say it aint so! Saint Marks Ale House closing is like someone just closed my living room. It was a very hospitable pub ever since it opened in '95 when the area was still dicey. Although I heard it described as a "dive", a much better description would be a "friendly joint". If you think it was a dive bar, then I can show you a few places that truly are. hahaha. I mean it had a pass thru window to the kitchen where you can see it sparkling at all times.

Lord knows how many of the area residents this place employed in the last 20 years. The manager had a knack for identifying fast and friendly staff. No one who ordered a meal ever left hungry as the portions were huge and the food was better than most in it's class. The music played was a good compromise - not your favorite - but neither something that will make you run out screaming with your hands over your ears as it's not ALL about the bass. I also disagree with those who called it bro-ey as most of them just stayed for one or two rounds before going to the real bro bars. The prices were beyond reasonable for the food and drinks.

I had many, many fun and fond memories of Saint Mark's and I wish all the staff luck and will try to catch up to you wherever you land. Thanks for making an area overwhelmed with gentrification such an oasis of kind hearted hospitality. You will be sorely missed!

I love this place and it will be sorely missed! I planned on taking my son for his first legal beer here. The Bull Burger was a staple of my diet. Very sad!