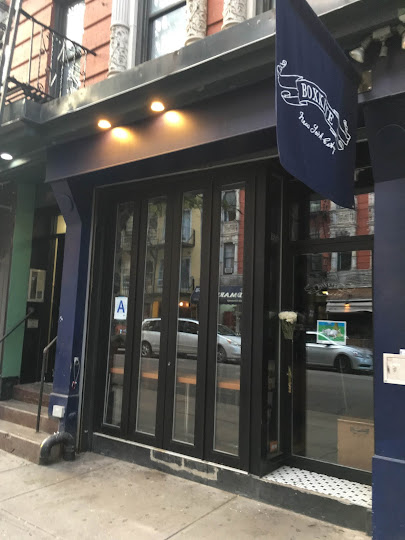 Box Kite Coffee has closed at 115 St. Mark's Place. The cafe between Avenue A and First Avenue shut down after business on Sunday.

Per an EVG reader, who first told us the news:

Pretty big for coffee enthusiasts in the neighborhood. Box Kite has closed! Went the day before for their brunch. Am pretty friendly with the baristas but I don't think they knew it was coming either. Texted one of them the next morning when I was greeted with locked doors and not a soul inside.

A sign on the door — showing a dead unicorn with stitches on its stomach — directs people to the Upper West Side location... 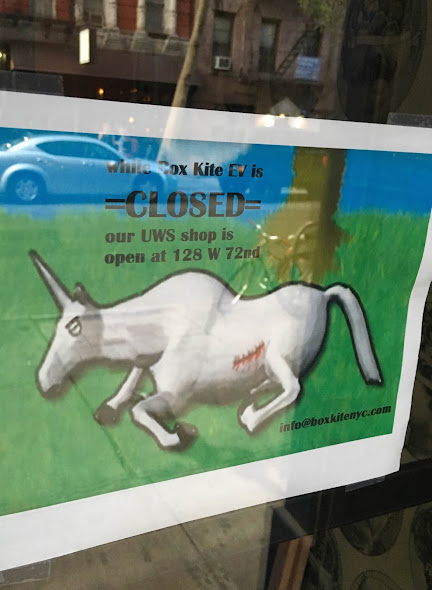 There's more from coffee publication Sprudge, who has this from an unnamed employee:

The location of the shop was never quite able to sustain the super premium coffee experience that it was set up to provide, and the other aspects of the business – the food and alcohol sales – never pulled their weight… The owner [Matt Prete] was always very up front with everyone that it was losing money and that he would be willing to tolerate it as long as it was fun and as long as we could get it reasonably closer to breaking even.

"While the news wasn’t altogether shocking (and part of the reason I’m no longer part of the project), I’m truly sorry for all the employees that lost their jobs and for all of the customers that went out of their way to give us their business. This was my first stab at owning something, and a great lesson on making better choices about who I will get into business with again."

Chefs Justin Slojkowski and Dave Gulino hosted a critically-acclaimed nightly chef's counter dinner in the space for part of 2014.

Looks like Charlie's not going to make it to Candy Mountain after all...

Strange...i always thought is was relatively crowded...at least on weekends.

This was another joint for those with self-illusion of selectivity that one has to overpay for to, you know, feel exclusive.

And of course, a coffee shop with a beer and wine license.


An uncle will be devastated of this closing.

This is a loss for the neighborhood. The staff was consistently welcoming and friendly to everyone, and they really made an effort to get to know regulars. Plus, they served excellent coffee. Not everyone is into coffee culture, but if you cared about it the way some people care about wine, you definitely appreciated the variety that Boxkite offered: coffee beans by small roasters from Berlin to Michigan. And they just brought back brunch, which was very good and reasonably priced. It's a shame to see it closed.

It's fair to say this ended in beers.

Motion: please stop using the word "experience" to describe every facet of human life from cradle to grave (yes, including film and television spinoff show titles.)

Sorry for the employees who were not given any notice. That's hateful.

Super premium coffee experience? No thanks, I'll just take a coffee with cream, no sugar, please.

I tried to like this place, but was consistently disappointed. I never felt welcome, having to wait for the staff to finish their texting before being bothered to give me any attention. The coffee was never good - both hot and iced coffees were lukewarm. I kept going back, thinking I was just there and an 'off' time, but never had a good experience.

If only their coffee spun on its own, I never would have thrown my back out!

I stopped going over a year ago: a few of the people who worked there were so aloof and nasty.

I'm going to miss this place. Great coffee, nice folks. And for all of you complaining, would you have preferred a Starbucks or another caffe bene? Because that's the alternative and you can see how great that is for the EV.

I thought they were friendly and their coffee good. There wasn't much seating though and somehow for me the design, simple though it was, didn't invite take out orders as much as Abraco on E 7th does.

I tried to like this place, but was consistently disappointed. I never felt welcome, having to wait for the staff to finish their texting before being bothered to give me any attention.

I went a couple of times on the weekends and besides having to wait in an endless line for overpriced coffee, I also felt unwelcome.

Their cold-brew was good but expensive; however, cold-brew is always expensive, unless you get it in your own cup at Porto Rico—or make it yourself.

And considering that I only go to $tarbucks to use their bathrooms: yes, I will miss this place.

Right, because a Starbucks or a Caffe Bene is for the plebians. And this place is for the pretentious and privileged.

And again the dichotomy of "better than ____". If the rent wasn't too damn high, then may the choice would not be between a corporate chain or an exclusive, trendoid, overpriced "coffee shop".

Ever wonder why it closed?

Big loss for the neighborhood and NYC coffee. I went to Box Kite a lot and was always treated incredibly well. (To some of the other commenters: I don’t know, maybe it's you?)

As far as the price, we've been criminally underpaying for coffee and a lot of other food for a long time. That cheap bodega coffee that a number of you seem to enjoy relies on underpaying at all levels, from producers, to roasters, packagers, to the very bodega employees who are making it.

Good quality food where producers and makers are paid a fair, living wage should cost money. And the coffee at Box Kite was really good. Some of the best out there.

If good coffee is not your thing, I get it. But to complain about the price of it? Come on. Box Kite was an independent business trying to do its thing. Enjoy Target!

And if price is your issue, you can make your bodega swill at home for far less.

And for all of you complaining, would you have preferred a Starbucks or another caffe bene?

Oh my GOD, just STOP with this crap already! it is the new "Go back to Ohio if you don't like [whatever is the current EV annoyance being discussed]."

Look, I have no dog in this fight. Overpriced fancy coffee (or any kind of coffee, frankly) is something I could personally give two shits about. But Box Kite was tiny. It is not going to be replaced by a Starbucks, or a Caffe Bene, just like the Russian Souvenir Shop was not going to be replaced by a Duane Reade. There is this thing called retail square footage; acquaint yourself with the concept.

Furthermore, people have every right to complain about whatever they want! If someone thinks a shop serves lukewarm coffee and is run by a bunch of elitist twats, they have every right to say so, and if that happens to be true and the shop fails, it doesn't mean that a sucky place deserved to stay open just because they weren't a franchise. Not every independent business is a good one. Grow up!

So tragic and such a loss for the neighborhood. They were masters of their craft.

My experience here was if you weren't a regular, you weren't welcome. That's fine, as I just went to better places. And now this one is closed. Go figure.