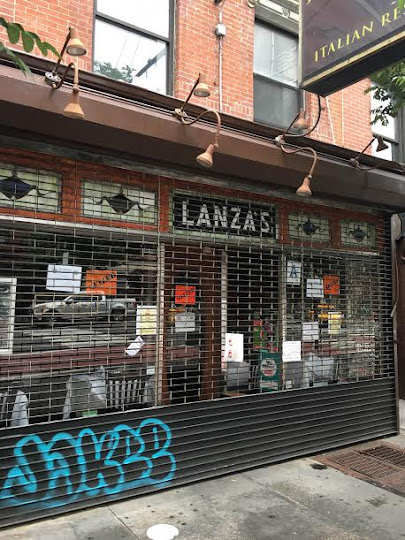 While the future of John's of 12th Street appears to remain secure, the news is less positive over at Lanza's on First Avenue. On July 14, as we first reported, the state's fluorescent SEIZED sticker (for "nonpayment of taxes") arrived at Lanza's here between 10th Street and 11th Street.

Nearly three weeks later, the SEIZED stickers remain on the front. The mail is also piling up. There's a FedEx awaiting pick up. It doesn't appear as if anyone has been inside in recent weeks... 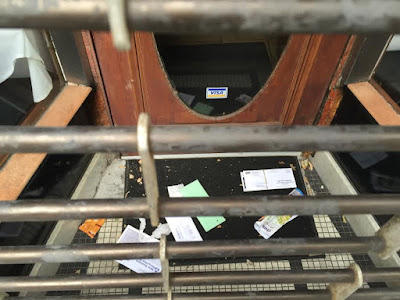 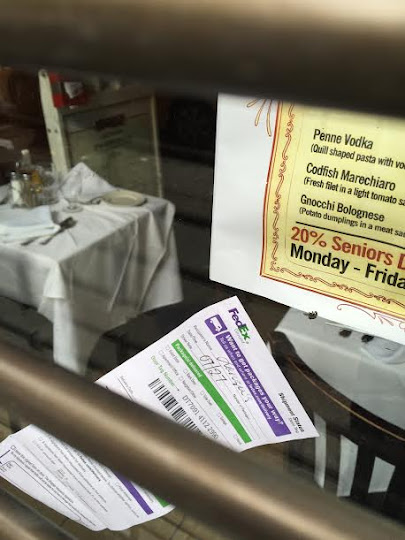 ... the tables remain set... and they're starting to look a little worn... 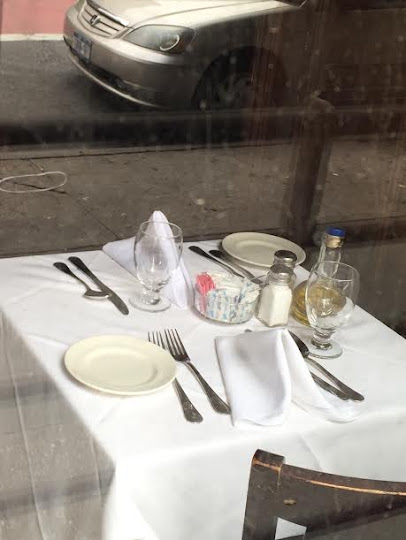 The only new sign on the door of late was to alert attendees of the new location for Kasia's baby shower last weekend... 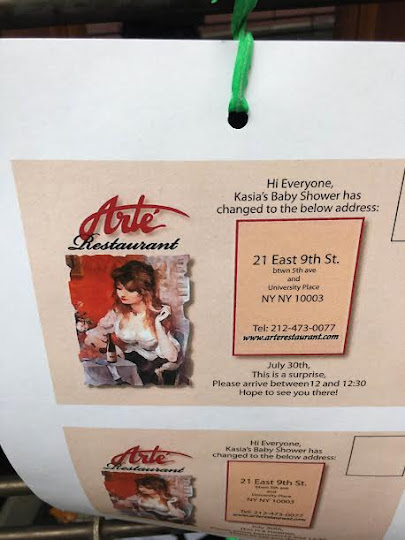 The old-world Italian restaurant reportedly first opened in 1904.
Posted by Grieve at 4:29 AM

This is sad. I hope they can resolve the situation with the IRS and get back in business.

This is such a bummer. I know this place doesn't get a lot of love from the Grieve readers, but the food is good and the staff are really sweet. I've been eating at Lanza's with my family for years - we only go 2x a year for birthday dinners, but they always remember us and shower us with free desserts, appetizers, etc. to celebrate. I'm keeping my fingers crossed that this will all be sorted out soon.

Interesting history to this place. I remember when they had black curtains over the windows all the time and the door was always locked. The only people going in and out were old guys in black suits. The whole block was connected to the mob, albeit in a relatively minor way. For example, if you walked into DiRoberti's and they didn't recognize you, it was very uncomfortable--I went in several times with a local until they got to know me. Can't say I long for stuff like that, but I'm glad I experienced it.

and the bodies went to the funeral home on lower second avenue.

"and the bodies went to the funeral home on lower second avenue."

Ha! That's true! I actually think the owners of the funeral home were related to the Lanza's folks.

@11:38 I'm sure people would care more if they too got free desserts.

Unfortunate this establishment with a long history in the Village has fallen in to the hands of poor management at best. The founders of this establishment and their children achieved the American Dream long before the phrase was coined they came to this country with nothing but hope for a new life. Decades of back breaking work and personal sacrifice was dashed In a fraction of its existence.

Actually, the Mob had a huge presence in the East Village from the 1920s to almost 1990.

The Lanza family still owns the property, 112 years of history. Hopefully they will bring it back to what it was, excellent italian cooking with a sense of family & friends breaking bread. This is what's lost today, gathering around the table to enjoy delicious italian food, wine and family.

The Lanza's still own the property.

I never found going into Lanza's uncomfortable, even when Mr. Lanza sat in the doorway with his oxygen tank. Those guys that hung out inside would whip up anything you want.

I was a regular at Lanza's for many years. I always had great service, and the food was excellent. I especially like Ronny, the maitre'd, for his friendly attitude and efficiency. More recently I was rather taken aback when I had lunch there and was asked to pay my check with cash, rather than a credit card. I had a sense that something was amiss.

Yes the family who owns the funeral home are the ones who own the building the restaruant is in. Our families have known each other for over 100 years n a couple generations