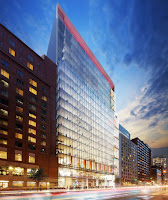 Tomorrow morning at 9:30, City Council is holding its only public hearing on the rezoning for Mayor de Blasio's proposed 14th Street Tech Hub.

The upzoning is necessary to allow for a 21-floor building — called the Union Square Tech Training Center — to rise on the current site of the former PC Richard complex on 14th Street at Irving Place.

The approval process tour — the Uniform Land Use Review Procedure (ULURP) — has already received endorsements from the City Planning Commission, Manhattan Borough President Gale Brewer and Community Board 3, who included an amendment in their resolution calling for zoning protection. (Note: Brewer’s recommendation also comes with a set of conditions. Read her report here.)

As previously reported, that zoning protection is the key for some concerned area residents and preservationists, who fear overdevelopment south of Union Square along Broadway, University Place and Fourth Avenue.

District 2 City Council member Carlina Rivera said during her election campaign last year that she'd sign off on the project only if the city agrees to downzone the surrounding area. As Crain's noted: "Because the council traditionally defers to the wishes of local members, her vote is crucial."

And more from Crain's, in an article published Friday:

"[Rivera] has been negotiating with the mayor's office throughout the process," a spokesman said. "She's going to be working on securing zoning protections that preserve affordable housing and the character of the neighborhood."

"Our conversation with council member Rivera has been productive," an EDC spokesman said in a statement. "We look forward to continuing to gather feedback from her, community stakeholders, and the City Council subcommittee as we present on this important project that seeks to diversify the city's tech sector."

Plans for the 240,000-square-foot Tech Training Center include educational facilities, market-rate office space and a food hall. Read more about the project via the city's Economic Development Corporation here.

Preservationists: City schedules next public hearing on tech hub without any public notice
Posted by Grieve at 10:00 AM