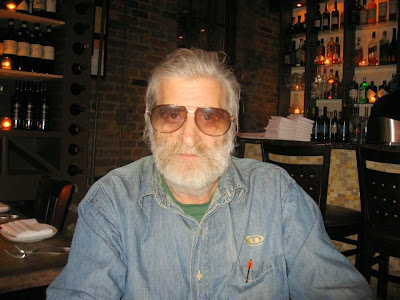 Feldman, a Bronx native who retired from the FDNY after 27 years in 1985, had been battling lung cancer and emphysema and used an oxygen tank, which didn't slow him down from smoking. He was a familiar figure on East Eighth Street between Avenue B and Avenue C, where he lived in a building that he bought in 1969.

According to a feature obituary in today's Daily News, Feldman began buying up distressed buildings in the East Village, Lower East Side and Williamsburg in the late 1960s.

"To him it was a labor of love, taking a building that was going to be torn down and turning it into something people could live in," his longtime friend John Knox told the Daily News. "He's a Lower East Side icon. People know him for the good things he did, bringing the neighborhood back."

One of his tenants told us that he owns up to 40 properties in these areas … that he never raised the rents.

As far as relatives, the tenant was only aware of one niece.

Feldman was also a prolific artist, and his sculpture of the firefighters who died in the 23rd Street Fire on Oct. 17, 1966, is on permanent display at the Cathedral Church of Saint John The Divine.

Feldman took thousands of photos of neighborhood fires in the 1970s and 1980s. He shared a few dozen with us this past fall, mostly of fires on East Eighth Street between Avenue B and Avenue D. We'll sort through those and post them at a later time.

This post also barely scratches the surface of Feldman's involvement in the neighborhood. We hope to collect some anecdotes and share them here. You may leave some in the comments as well.

Did not know him, but damn, I am sorry that I did not. Another piece of EV history now lost forever. Rest in Peace, Mr. Feldman, wish there were more like you still around.

Ralph Feldman an East Village legend who died recently was with the FDNY for 27 years he died from Emphysema and used an oxygen tank near the end. This was probably related to his FD work. My photos of him were published in the 90s in the NY Times because he had squatted an old Synagogue and was trying to save it. It didn't work but it was the most insane Shul that ever was on the Lower East Side while it lasted and it was a beautiful building on the inside. Ralph was pretty crazy and lost a building he owned because he punched Josh Whalen and the court took control of his building from him and some of the people who lived there did so rent free for years because of the fight. Some are still there but pay rent now. Ralph was old Skool Jewish LES and I am sorry to hear about his passing. We are all going now and the East Village will never have the kind of legendary characters it did in the past because the new Gentry are bland, robotic like, boring Jackoffs. RIP Ralph.

Thinking more about Ralph Feldman and his passing. Since he was a FDNY Fire Marshal for 27 years during a very long period of time when there were many fires in the LES and elsewhere in NYC Ralph had to have seen some terrible things on a regular basis because he would have been the one to go in after a fire to investigate it and you can only imagine what he saw. Considering that gives some insight into some of both the good and bad things about him. Again RIP Ralph FDNY.

I lived next door to Ralph a few years a sweet man who will be missed RIP..

I lived next door to him for three years knew him for eight RIP Ralphie Boy !!

This is the first I've heard of Ralph's passing; I don't know when I saw him last, but it must have been recent, since he lived a few doors down from me.

The main thing I'll always remember about him is how blunt and outspoken he was; he wasn't always right, of course, but he was never afraid to voice his opinion.

I hope you keep us posted on whether there's going to be a memorial for Ralph; I'll definitely be there.

Ralph gave me and some friends a tour of the old synagogue which we later learned he was squatting in. He told us that he was restoring it for the community. Incredible if dilapidated structure. Old murals of the zodiac on the walls. He strangely told us that he owned a motel in the Catskills that he wasn't allowed to come near or he would be arrested. It was an interesting afternoon. Later we found out that he was the slumlord of an apt. building some very good friends lived in and they hadn't paid him rent in years due to the terrible state of their building which he rarely repaired. He was a character that's for sure but not entirely a good one.

"he never raised the rents." hats off to this man. RIP!!

The last 2 comments made me wonder.. What will happen to the people still living in buildings Ralph owned now that Ralph is dead ? Did he have family who will get them ? Will they all be sold ? Who knows, but it is an interesting question, as is the question, how many properties did Ralph own when he died ?

Ralph Feldman and i were friends for 30 years.He produced a play called 'The Candy Store' in 1985,in which i played an american indian princess,and an asian indian princess'.He offered me south williamsburg,1000 squ foot loft with a view of the world trade center for $400 a month in 1986.I accepted,and he never raised the rent.We were friends ever since.Years later,when i returned from Europe he called me everyday until he found me a new home.He was a true friend,and i miss him so much.Thank you E.V.Grieves for posting this obituary for Ralph.
Angel Eyedealism

I have known ralph from the neighborhood for the last few years.
He was a good soul. He was an icon in the hood and didn't go unnoticed in his signature overalls. His longtime sweetheart, Susan, was always by his side. .also an amazing woman. .he was opinionated but i appreciated his candor over many a glass of wine at their home..he will truly be missed.
Can someone please post memorial information if there is any?

Ralph had some good qualities but he wasn't known as a slum lord for being a good guy all the time.