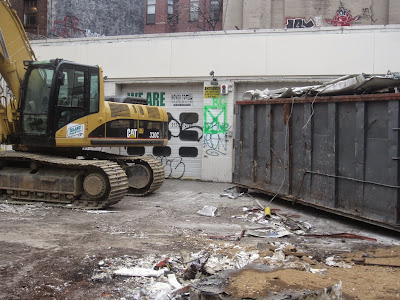 At long last reps for the developer filed the new building plans for what's coming next to the former BP station on Second Avenue at East First Street.

New York Yimby had a few more details on Tuesday about the property that AORE Capital paid $32 million for last July. Per NYY: "The 10-story development will have 52,700 square feet of residential space and 6,000 square feet of retail spread between the cellar and first floor. There will be just 31 apartments, which works out to impressively sized units of 1,700 square feet a piece."

Apartments will begin on the second floor, with four to five units per floor through the sixth story. The seventh and eighth floors will host two duplexes, and the ninth and tenth floors will hold one penthouse duplex with a private roof deck. Amenities include a shared terrace and recreation space on the second floor, and a fitness room, storage and bike storage in the cellar.

NYY also found a rendering for the project, though it may be out of date as it only shows eight and not 10 floors. 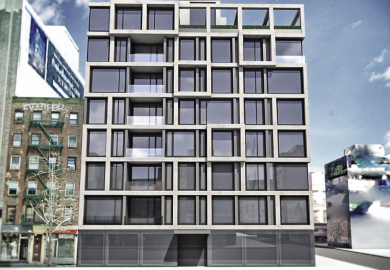 I was down that way yesterday. Unbelievable.

Jesus. H. Christ. Between this and the final evisceration of East 9th Street, once one of the most eclectic and interesting blocks in the East Village, there really are no words. Except maybe, damn you to hell, Ghouliani and Bloomturd.

Looks like they're keeping the waffle-iron motive from the waffle boutique up the block.

More $3 million plus apartments for financiers and international criminals hiding their loot from the taxman.

I've enjoyed living here, but I don't want or need to live in Midtown South. I feel sorry for those who can't leave too.

where does everyone work that can afford these new places?!

Anonymous said...
where does everyone work that can afford these new places?!

Law firms and financial institutions. At least, that's where ninety percent of the new people moving into my old co-op seem to work.

If Deblasio has his way there will be no limit as to how high someone can build. He must be stopped.

And The Cock is right across the street if your upscale lifestyle is too constricting!

OMG, another architectural horror! Between the book ends of Cooper Union and the New Museum, and all the oddly tiling boutique hotels in between, this only adds to our LES postmodern nightmare. Is there any way we can bring a law suit against this visual trauma?