The former Contrada space is for rent 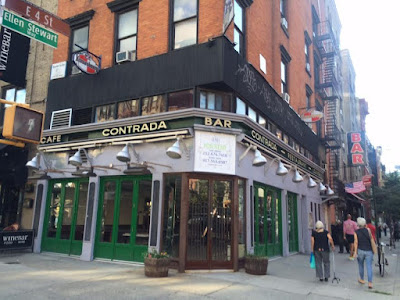 Apparently the closure isn't temporary: A for rent sign arrived at the space yesterday,

In the spring of 2014, the space evolved from Calliope, a French bistro. Prior to this, Belcourt held forth in the space.

Previously on EV Grieve:
Contrada has not been open lately
Posted by Grieve at 4:20 AM

Email ThisBlogThis!Share to TwitterShare to FacebookShare to Pinterest
Labels: Contrada, restaurants that are now closed

I've liked all the restaurants here and I definitely like the way the space is designed. Let's just accept the prior tenants weren't up to the job of getting this to work... I really hope the next tenants can make a long run here.

Does $16k seem like a lot to pay for what is being offered here? All resto industry tips welcome...

this makes me sad... The chef here was doing some amazing things with food! The satff was also very nice and always warm and friendly.

considering some of the corner rents further up towards 14th street this doesnt seem all that bad. *immediately stops and shakes my head, realizing what its come to*
def should raise the bar concept-wise, cant be coming in at those numbers with some weak ideas/staff.

good riddance. it was just too expensive. please, bring back Frutti di Mare!

Hopefully, the next business won't be frequented or run by bros... The EV often feels like the University of Chapel Hill on the weekends. All of the cavorting, screaming and disregard for residents has become insufferable.