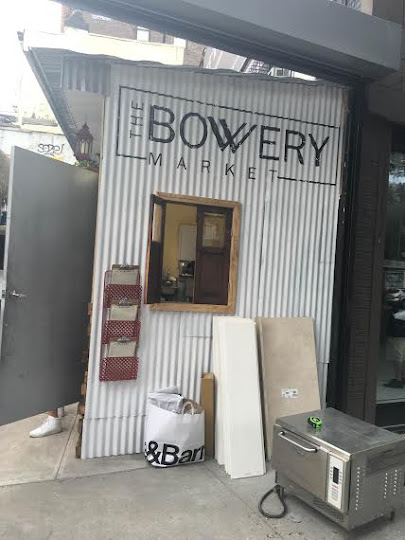 The open-air food market that we've been writing about at 348 Bowery and Great Jones is opening today... workers were making last-minute preparations yesterday afternoon, as these photos by an EVG reader show... 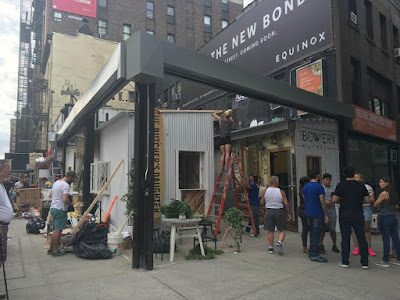 The Bowery Market, which will be open year round, features five vendors. Here's more about what to expect in the 1,000-square-foot space via Zagat:

At Alidoro, you can expect over 20 Italian sandwiches and salads including their Fratelli D’Italia with porchetta, basil pesto, fresh mozzarella, hot spread, sweet peppers, and arugula​. Butcher's Daughter will offer healthy veggie-focused options like juices, macro bowls and breakfast burritos. Head to Pulqueria for tacos and their famous Granada de Piña, a Mexican pina colada made with chili spices and pulque (fermented sap of the agave plant), served in a frozen, cored pineapple​. Sushi on Jones will offer fresh nigiri sushi and Champion Coffee will offer signature drinks like Maple Cortado: milk, maple syrup and espresso​ in addition to classic coffee drinks.

[Photo by Ken Moore via Zagat]

The quick-serve kiosks will feature limited seating in the form of stools at each food stand as well as several benches on the premises.

The address has been without a full-time tenant since Downtown Auto & Tire left in April 2012. The Deth Killers of Bushwick opened a pop-up shop here in February 2014, selling their brand of jeans and motorcycle stuff for several months. There was also the Nike pop-up shop in February 2015.

There were other proposed concepts for the space, which has been on and off the market for several years. In July 2010, a group aspired to open the first New York branch of Segafredo Zanetti Espresso Café, the Italian-style coffee bar, on this spot. They went before CB2, who rejected the proposal, which included a patio with a retractable roof with soundproofing as well as sound-resistant sliding doors.

Zagat noted that "remnants of the former body shop remain including graffiti."

Rumors: 348 Bowery will house new food market
Posted by Grieve at 4:21 AM

In other words, it's like a giant food truck without wheels. How long before they apply for the cafe outdoor seating license?

I guess diners will be taking their purchases further up the street to the new plaza if there's a lack of seating. Unfortunately, there are no garbage cans on the plaza..hopefully, they'll be added when construction is completed.

I walked past it today. Looks cool, but awfully small. Oh well. Maybe it will be cool..

This will be just another place for hipsters and wannabes to congregate and pose.

big time. it's all about status. selfies and pictures of food too (are people still doing this?). That corner is going to be ridiculous, especially since standing on a long line is pop culture now. Don't try commuting by there, find another way.


I used to enjoy food before it became art. And expensive. Enjoy yorselves, you gullible dopes.

We know you, JQ LLC, won't be enjoying yourself save to run your keyboard mouth about local/area businesses making an honest living and providing quality inexpensive food for everyone not just the people who live in the luxury housing on and off the Bowery like you, a NIMBY all bummed out that these people moved too close to his/her 1.5M apartment on the Bowery (or you come off like that.)

WTF has happened to the bowery? It is a shit show of homogeny, luxury, and bullshit. Where's the character? The distinction? It used to be the bomb. Now, you have to make over a million dollars in order to live here. RIP NYC :(

This is an outdoor food market with local/area vendors, hardly "a shit show of homogeny, luxury, and bullshit". Try the exact opposite of that.

Big deal the Bowery is unaffordable. There's nothing of interest on it anymore than this outdoor food market and Bowery Electric if you like the crap they book.

OMG! What a bad investment for all involved in this venture. I live a block away. We are already saturated with tacos, coffee bars, sushi,, gourmet sandwiches on every corner. Whoever is behind this venture should have done things which are actually needed: Like gourmet Chinese, healthy Cuban, Take away french, Savory Thai, las vegas pancakes and all you can eat brunch.. Honestly, why go to this fiasco of a market when you can go down the street to Whole Foods and find the exact same stuff?