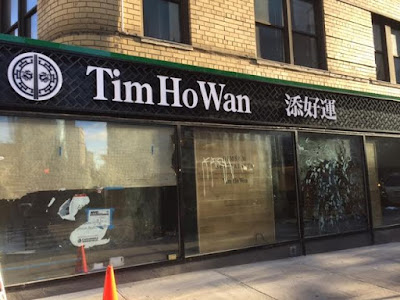 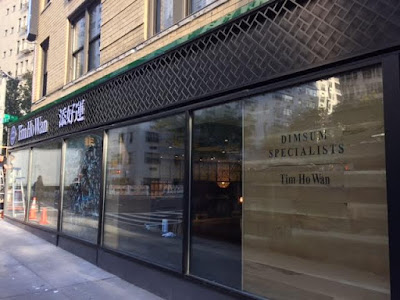 A restaurant rep told me that an opening date has not been set just yet.

In 2009, the original 24-seat dim sum eatery in Mongkok, Hong Kong's Kowloon, was reportedly branded the cheapest Michelin-starred restaurant in the world.

The address previously housed Spice, which closed in December 2014.

Previously
Posted by Grieve at 4:05 AM

Are you sure that is not "Tim Horton's", horribly misspelled?

This afternoon I asked one of the workmen when it was scheduled to open; he said next month. I wonder if they will do take out? A sign of the times for EV Grieve? The five newly posted items this morning all dealt with restaurants. It would seem that the East Village has become Eat Village--so much for all those on this site who are living in the memory of when the EV was a vibrant home to the creative arts.

Four storefronts on the north side of 5th St between 2nd Ave and Cooper Square are now up for rent by Brookhill Properties. There are four identical signs advertising space for "restaurant/cafe" and stating that the landlord will put up cash for fitting out a restaurant.

Why are none of these available for retail or creative office space? I can only guess that there is some tax advantage for the landlord to put money into renovating for restaurants. With the offer of cash to build out, it would seem to attract less experienced restaurant owners, those with little cash to fall back on..i.e, more restaurants that will survive for a few months and then remain empty.

This is a residential street with tree pits, garbage cans and already narrow sidewalk. The idea of 4 more restaurants on one side of the street is appalling. There are already two restaurants, two bars, one coffee place and two hair salons.

Our EV retail is disappearing rapidly. There is almost nothing to buy here besides food, beverages, hair and waxing services and drugstore supplies( and even they are selling prepared food). Why would a landlord demand only restaurants?

I have been longing forever for a dim sum place in the EV. It would absolutely KILL. Metaphorically, of course. I have never understood why nobody has ever set up a small dim sum takeout place here. Can you imagine, all that lovely char siu bao and har gow and rice rolls? I would eat takeout from there five nights a week, and I bet other people would too. This Tim Ho sounds as uppity and upscale as Momofuckyou, though I would hope they'll do takeout.