The Redhead closes for good in January 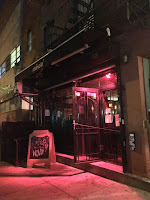 The staff at the Redhead is telling patrons that the unassuming, Southern-flavored restaurant on 13th Street is closing for good in January.

For starters, the 10-year lease at the Redhead between First Avenue and Second Avenue is up (and there is a rent increase)... plus, the partners have apparently been living out of state. (Chef/founding partner Meg Grace Larcom is now in Colorado.)

In August 2009, Frank Bruni, in his last review for the Times, gave the place high marks:

"[The Redhead] sharply reflects a few of the most prominent and rewarding developments in Manhattan dining over the years during which I’ve had the privilege of serving as The Times’s restaurant critic.

Now more than ever, diners find principled, distinctive cooking in places where they wouldn’t have expected it before: dessert trucks, baseball stadiums, postage-stamp storefronts, wine bars, taverns and cocktail lounges. In fact the Redhead...exemplified the possibility of terrific eating with untraditional trappings and captured the sense of gastronomic serendipity that defines this culinary moment.

There isn't a set closing date just yet. The Redhead will be open for a New Year's Eve service/celebration.

Email ThisBlogThis!Share to TwitterShare to FacebookShare to Pinterest
Labels: The Redhead

I had a pleasant meal there a couple of years ago. When I went back for Happy Hour I met with an indifferent unfriendly attitude from the staff. A lot of Yelpers felt the same so taa taa...

never had anything but satisfying experiences with the food and service here. The fried chciken was truly first rate. Sorry to see them go.

Like the first poster, I had great meals and great times there back in the early days. It was a neighborhood joint, and it was warm and friendly. But the friendly vibe hasn't been there the last few years. The service went downhill. I don't know what the situation was. I remember being so sad when the same thing happened at Old Devil Moon, one of my go-to places for years until the management became hands off, and the vibe changed. It's hard to run a restaurant long term and keep in place what made people go there to begin with.

I will be very sad when this place closes down. Their bacon peanut brittle is heavenly. The owners are super sweet too. :(

too bad. i took my girlfriend there for a NYE dinner last year. cute spot.

I don't recall the name but does anyone remember when this space was a neighborhood bar? It was in the 90's and it was a pretty chill space that would also have great music and the occasional jazz quartet on the weekends.

Must stock up on that brittle.

... the bar was called Detour. Damn, i miss that place, had some fun nights there.

Similar experiences, absolutely loved the place but noticed a bit of decline. On my last visit the staff cheered before we were even out the door celebrating they got to go home early.. it was like 9:30pm. Absentee owner stuff now makes sense.

Unfortunately, a business like a restaurant is not a business that can be run properly from a distance. You need the owners there and involved to keep the standards up. It's sad to see a place that was once so great end its run on a sour note. I hope something interesting opens there again soon.

I live a block away but always got a chilly vibe when I went into the place.. Would rather go to a bar like Lucky on avenue B...

I agree this place definitely has gone downhill over the past couple of years but will definitely stop in to have some fried chicken before they close the doors.

Anyone notice it was after the restaurant's very positive appearance on the Food Network's Diners, Drive-Ins and Dives that the Redhead started to go south? Any connection between large TV-inspired crowds and a sudden disinterest by the kitchen and wait staff?