About the cantilevering condos coming to 4th Avenue and 10th Street 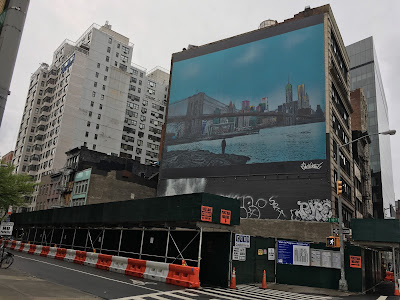 Workers have now surrounded the new development site at 71 Fourth Ave. and 10th Street with a heavy-duty sidewalk bridge.

As previously noted, a 10-story, retail-residential complex will rise here. Given the square footage allotted for the 12 planned residences, condos were likely.

Last week, The Real Deal reported that NAVA Companies "is targeting a $72.4 million sellout" for the (officially now!) condoplex, according to a condo filing plan accepted by the New York State Attorney General’s office.

According to the filing, units would span an average of more than 2,000 square feet. The $72.4 million projected sellout means units would cost on average of over $6 million. The AG’s office approved the plan on April 7.

The NAVA website says that sales will begin in the fall. There's a teaser site up and running for the building, officially 80 E. 10th St. ... (at least this guy is wearing a shirt) ... 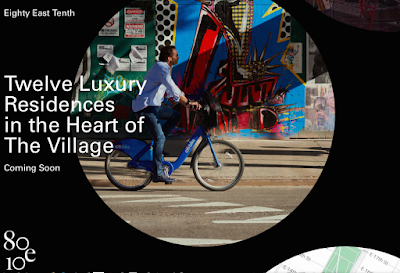 And as a reminder of the condo cantilevering to come... 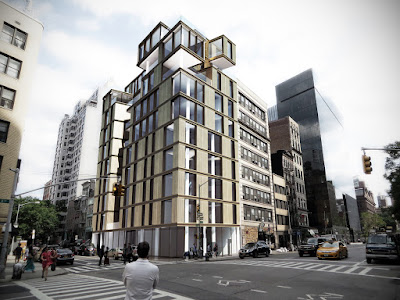 Meanwhile, once the construction really gets going, 10th Street between Fourth Avenue and Third Avenue will be a tight, potentially dangerous, fit for pedestrians, motorists, cyclists... 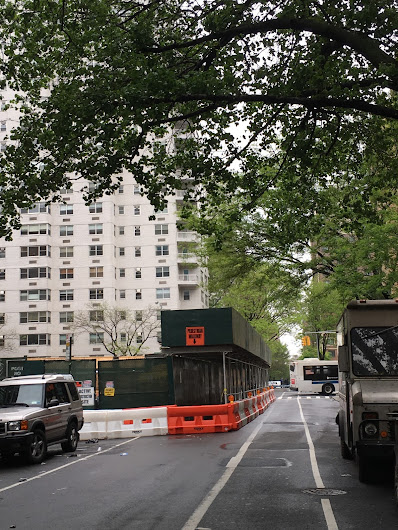 With new building OK'd, corner of 4th Avenue and 10th Street finally ready for razing
Posted by Grieve at 4:11 AM

How will that citibiker navigate through there now?

Nice walkway, looks like a good place for raping and robbing, and settling there with your pushcart.

I hope they mention the close proximity to the incoming Moxie Hotel, wall to wall sports bars on 3rd avenue in the sales pitch.

Man they get Uglier and Uglier.

I rode through that block, it is kind of a dodgy situation. But mostly because of the thick stream of clueless fuckstick Tim Who Han/Ippudo clientele crossing both 10th street and 4th ave against the light. Pardon my language.

Very narrowly avoided being flattened by a speeding sedan turning south in Third Ave from10 th Street while crossing east to west south side Third Avenue at 10th Street 2 nights ago on a green light around midnight. Saved myself only by jumping back to the grill of front car stopped in uptown lane.

And if they didn't build the walk-way, as per city building department regulations, EV Grieve posters would complain about the carelessness of the builder who was endangering their lives.

Go down another street for the next year.

It would be safer just to shut the street down.