Members of the Toledano Tenants Coalition (TTC) visited the Upper West Side home of Raphael Toledano last Saturday "to bid farewell to the junior speculator landlord" whom they’ve battled for the last two years, ever since he purchased more than 20 East Village buildings, according to a statement from the group.

Tenant organizations from around the city associated with Stabilizing NYC joined the protest. Some participants wore Toledano masks and carried signs that riffed on his boastful quote last summer to The Real Deal: "I'm worth a fuckload of money, bro."

There was also some dancing.

As previously reported, Madison Realty Capital has replaced the 27-year-old landlord as the property manager of 15 East Village buildings while a deal to transfer the ownership is worked out. In late March, the LLCs that Toledano used to purchase the 15 buildings in the Madison Realty portfolio filed for Chapter 11 bankruptcy.

Toledano purchased 28 buildings in two separate portfolios from the Tabak family for a total of $140 million in the fall of 2015. Since then, he has been accused of a variety of predatory practices.

In addition, 20 of his buildings were tested for toxic levels of dust. Last spring, Toledano agreed to pay more than $1 million to settle a lawsuit that alleged that he harassed rent-regulated residents at 444 E. 13th St. He also apparently ruined Thanksgiving last year for a few East 12th Street residents.

Here's more from a statement on Saturday's Toledano rally:

Tenants believe the time has come to make Mr. Toledano feel less comfortable at his home since, according to tenants, he has seen fit to do the same to them. Tenants report that Mr. Toledano has on at least two occasions refused to meet face to face with them and elected officials to discuss issues of importance to tenants, and so tenants say they are voicing their concerns directly to Mr. Toledano at his home.

[Saturday's] protesters assert that Mr Toledano has not met his obligations as a responsible landlord, forcing tenants to live in vermin-infested buildings without cooking gas and creating construction chaos as he haltingly renovates buildings. 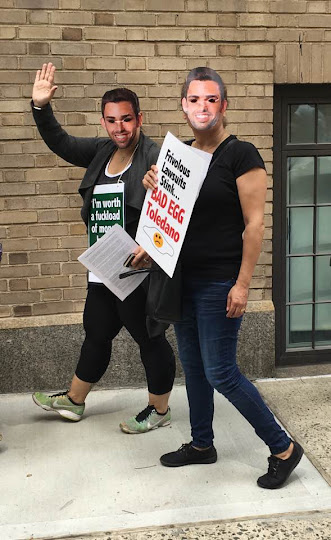 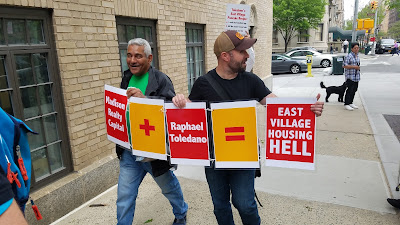 The Times reported this past Sunday that Toledano was selling off his other East Village properties that are not part of this 15-building portfolio in foreclosure. Per the Times:

[Toledano] said he was in contract with an investor to buy a $200 million portfolio of properties in the West Village, a neighborhood where he said tenants were less organized.

I kind of want to get out of the East Village walk-up business, to be honest," he said, without a hint of remorse. "There is so much scrutiny of the buyouts."

Responding to Toledano’s statement to the Times, the TTC vowed to help West Village tenants to resist him. One sign at the rally read "You can’t hide in the city, Raphael Toledano, We will find you!" 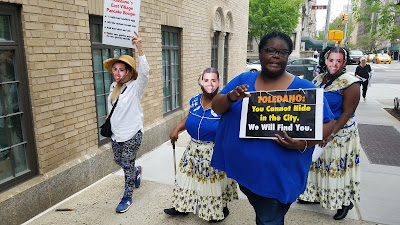 Raphael Toledano tenants take to Midtown streets to speak out against their landlord and his lenders
Posted by Grieve at 4:30 AM

Since smurf-face Rafi Toledano will soon no longer own those buildings anymore, these won't be Toledano Tenants, they will be Toledano Survivors. The more we learn about what really happened here, the more it becomes obvious that this cartoon character of a real estate "tycoon" was basically just a front man for Madison Realty Capital and their vulture capital investment model. Who loans some kid with no experience runnng so many buildings this much money? His role was to get the buildings cleared of rent stabilized tenants and quickly renovated with jacked up rents. and if he failed, which he did, Madison got to own the buildings. Either way, Madison Capital wins and tenants lose. The fact they they had anything nice to say about Rafi in The NY Times piece, in spite of him not paying them on the mortgage for almost a year, was a dead giveaway that this deal was a setup all along.

As for his $200 million dollar West Village deal, if it's the same Sutton kid that backed out of the East Village deal after realizing what a shitshow it was, he's got more money than brains to get involved in another one of these risky deals with an owner who has proven he does not have a clue or an ounce of concern for tentnats living in toxic and inhuman conditions, And if Rafi thinks West Vilage tenants are a pushover, he's never been to the West Village,

I love this, congrats to these people in taking shame (which he apparently is incapable of feeling) to his front door. Hope is neighbors if they already don't know or share his point of view on the world, realize was monster lives in the midst.

Right on to these tenants, give him hell!

Great!! Great!! More demonstrations where these landlords live. Make them uncomfortable. Same thing should happen to the politicians who march hand in hand with the landlords.

The community response is a fucking riot.

He deserves every stinkin' thing that happens to him. And if he thinks the West Village is full of push-overs, it just proves what a slow learner this jerk is.

I hope the DA will do a full investigation and take-down of this so-called "business."

residents on a Toledano building on West 16th, which is in foreclosure, had no hot water or heat for 5 days. was fixed last nite.

6:19am -- Infographics were handed out to passersby, which included many of his neighbors. Some expressed surprise. Others were aware already, but usually not of the full extent of the Signature Bank-Madison-Toledano circus. A number of them asked what they could do to show their support.

Brutal!!! He probably deserves it though, and then some. Love a good payback story.

Terrible. Toledano spreads misery easily avoidable if he was not such an exploiter of his fellow man.

His family should be forced to live in the lead dust ,Asbestos Hazards , no gas , no heat ,no water , mouse infested Hell Hole he created . I hope they put his butt in jail soon

Its a shmae that you guys are all unemployed and wallow in your own worthlessness. I was a beneficiary of rafis golden heart and no, i am not his wife or relative. And to go to his house?? Really???

Occurs to me that we will need those info graphics and histories to distribute in the West Village soon . . .

@3:18PM. It's a 'shmae?" LOL. Learn to use spell check and apostrophes and capital letters properly. And use fewer question marks. These are all sure signs of illiteracy. You know what's a shame? It's a shame that Rafi's so-called friends can't use words like "compassion" or "fairness" or "sorry" and seem to be every bit as selfish as he is. But as they say, "Birds of a feather flock together." It's a shame you don't read the news and understand how badly he has treated his tenants, or care about how miserable he has made their lives. Try living in one of his buildings, I bet you won't be frends with his "golden heart" for long.