Steve Croman, who is charged with 20 felonies and a civil suit accusing him of forcing tenants from their rent-controlled apartments, is due back in court tomorrow morning (Tuesday, May 2).

Croman tenants are holding a rally outside Manhattan Criminal Court at 100 Centre St. at 8:45 a.m. Afterwards, tenants are going to room 1333 on the 13th floor for the legal proceedings.

It has been nearly one year since State Attorney General Eric Schneiderman announced the charges against Croman. His criminal case has been adjourned and bail continued five times now, according to the Croman Tenants Alliance. (His civil court date is June 5.) 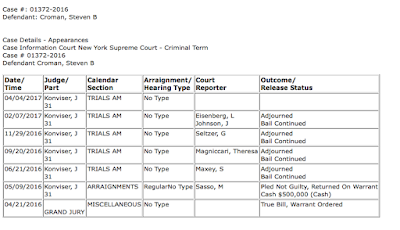 Richard Johnson at the Post this morning reported that Croman was going to cop a plea that will have him serve eight months behind bars and pay a fine of $5 million to $10 million.

Croman is said to be thrilled he will get off so lightly, and so is his wife, Harriet, who is part of a wealthy clique of Upper East Side moms.

Croman faced up to 25 years in prison on charges of harassing rent-stabilized tenants so he could lease their units at market rates and inflating his rental receipts in order to fraudulently secure $45 million in bank loans.

As usual, it pays to be rich. Unequal justice is the hallmark of our legal system in the USA.

The judge should absolutely not accept this plea deal--these are the biggest charges ever brought against a New York landlord, and eight months in jail is not enough for this greedy Neanderthal. Otherwise, the justice system is telling landlords that crime pays, and tenants rights don't matter. The free markets doesn't correct these kinds of abuses, only the justice system can.

I hope this duche bag gets justice served...

The judge should absolutely not accept this plea deal--these are the biggest charges ever brought against a New York landlord, and eight months in jail is not enough for this greedy Neanderthal.

I thought his name was Cro-magnon?

@Scuba Diva. My apologies. You are correct. Neanderthal is too kind for his ilk. And this is one Cro-magnon that's going to need a good Crowbar tp get out of where he is going. Since his sentence may be less than a year, he might have to do alll of his time on Rikers Island, which from what I hear is even more crowded than the Hamptons in the summer, and their parties are supposed to be a total riot.


Amazing how Croman committed bank fraud to the tune of $65 Million Dollars - yet he outrageously only gets 8 months jail time (1/3 off for good behavior) and only has to pay back 5 to 10 million dollars.

Wow - He can keep all the rest of the money he stole and as soon as he gets out of the slammer he will be once again be enjoying his several mansions and his lavish, decadent lifestyle and his millions and millions of dollars.


THE BEST JUSTICE MONEY CAN BUY


The AG failed tenants but is now a champion of landlords !

The Article on a Croman Plea Deal in the ' Post Page Six ' was NOT put there by the Attorney General's office. Does anyone actually think that the AG would announce a plea deal with Croman in the sleazy Page Six section of the Post?

The Page Six article was a devious ploy most likely placed there by Croman's high powered lawyers and the Croman's PR people which is
Phil Singer's Public Relations Firm, Marathon Strtegies. They would love to have the tenants and the public turn against the AG, but it didn't work.

Thank you Attorney General Eric Schneiderman for doing such a fine job in bringing Steve Croman and Anthony Falconite to justice.

@1:23AM Exactly. This looks like a PR stunt. No legitimate news outlet has reported anything about a sweetheart deal. It's like something out of "Billions" on Showtime, but Eric Schniederman is no Paul Giamatti, and Steve Croman is no Damian Lewis, especially based on his looks. My guess is when Cro-Mason Man gets his day in court, the result won't be cinematic.