Supporting 249 E. 2nd St. during the construction next door 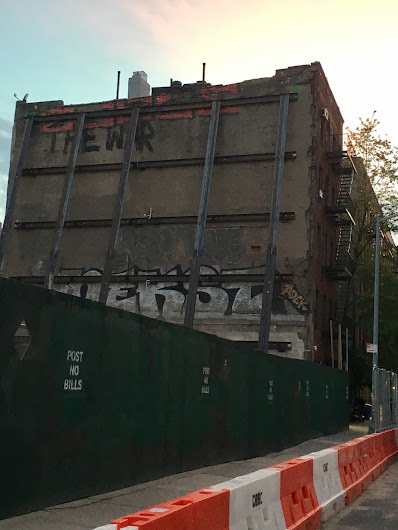 There have been several complaints filed with the city this year about No. 249 ... due to the construction next door at the all-new Avenue C, future home of a 10-story, mixed-use building with 46 residential units at the former site of the Mobil station.

Per one complaint on file with the DOB (in their all-cap style): "DEMOLITION AND DRILLING BE DONE. CRACK IN CEILING WALL IN MAIN ROOM. APARTMENT SHAKING AND VIBRATING EXCESSIVELY TO THE POINT OF FURNITURE MOVING."

There was a partial stop-work order issued last month when No. 249 reportedly shifted.

And this isn't the first time a building adjacent to a development site has been damaged during construction. There were reports of cracks at 183 Avenue B during the foundation work for the 7-story mixed-used residential building at 185 Avenue B.

Isn't 249 the home of Peter and Jack, who founded Le Petit Versailles garden to the west of the building?