Collateral damage at Hub Thai on Avenue A 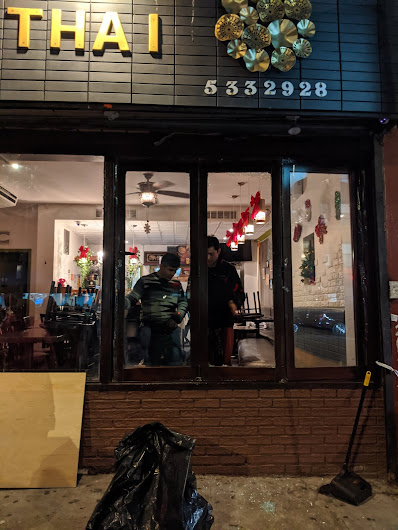 An EVG reader shared these photos this evening... the front windows at Hub Thai on Avenue A were hit during the early morning shootout on Avenue A between Sixth Street and Seventh Street.

The restaurant is adjacent to the Hayaty Hookah Bar at 103 Avenue A, where a fight between Earl Facey and Richard Reid started. According to the Post, the altercation began after the women they were with bumped into each other.

Outside the bar, the two men reportedly shot at each other during a chase, per NBC 4. Both men were said to be carrying a .22 caliber handgun. Two uniformed officers who were on patrol nearby shot Facey on the northwest corner of Avenue A and Seventh Street after he refused multiple times to drop his weapon and lie on the ground, according to police accounts and media reports. Both men later died at Bellevue. 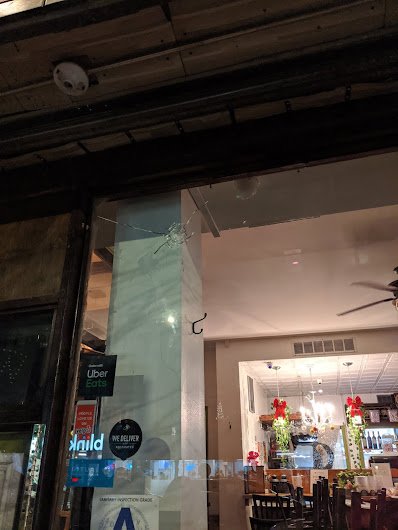 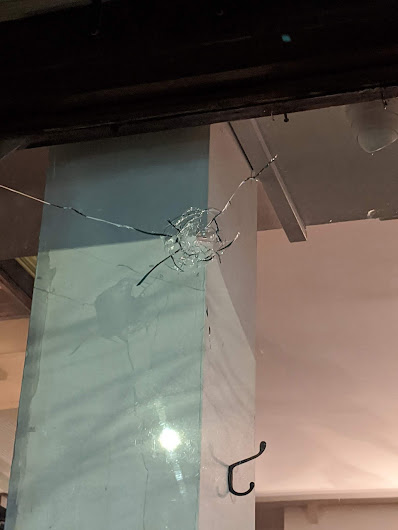 Hub Thai was expected to reopen soon after the windows were repaired. Thankfully, the restaurant was closed at the time of the shooting.
Posted by Grieve at 7:30 PM

It was lucky that shooting happened at 3:30 AM in the morning instead of in the afternoon when that street would have been crowded with people. Could have been a lot more people shot.

Crazy to think getting bullet proof window should be considered when designing the restaurant.