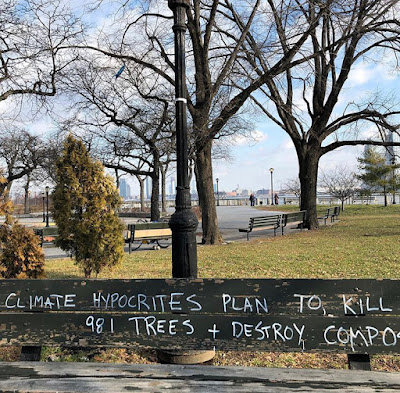 The Lower East Side Ecology Center has launched a petition campaign ahead of the planned reconstruction of East River Park as part of the the hotly contested East Side Coastal Resiliency Project (ESCR) to protect against future storms and rising sea levels.

Per their media advisory:

New York City is currently seeking a construction contract to destroy the East River Compost Yard and create a temporary lawn. The Compost Yard is located in a section of the park scheduled to be reconstructed as part of the ESCR in 2023, but under this recent announcement, the compost yard would be relocated as soon as April 2020.

The alteration of the compost yard into a temporary lawn is moving ahead rapidly without community input and was not announced at recent community board meetings. Not only will this plan cut off New Yorkers from composting and effectively kill our community compost program, but it is also a tremendous waste of taxpayer dollars to create a lawn that will be destroyed in three short years.

There are over 3,500 households donating their food scraps on a weekly basis that participate in this program. We offer 10 drop off locations in Lower Manhattan where we prevent hundreds of tons of organic material from entering landfill every year. The finished compost is distributed for free in the community.

And their ask, per the petition:

As of this morning, nearly 1,500 people had signed the petition. You can find it at this link.

This past Nov. 14, City Council signed off on the controversial plan that will bury/elevate East River Park by eight feet. The phased-in construction is expected to begin in the spring. (A coalition of community groups who oppose the plan is expected to file a lawsuit. Read about that here.)

Next Thursday (Jan. 16), CB3's Parks, Recreation, Waterfront, & Resiliency Committee will receive an update on the construction and timeline from officials at the Department of Design and Construction. That committee meeting, which is open to the public, starts at 6:30 p.m. in the BRC Senior Services Center, 30 Delancey St. between Chrystie and Forsyth.

Thanks for posting this. The LESEC has been part of our neighborhood for decades and we benefit from their presence. I want to highlight the free compost they provide for street trees. My neighbors and I recently picked up several carloads from the East River Park location for our block’s trees. This only works if they’re here! Please sign the petition and write to Carlina and the mayor.

Signed. And agree with Anon. 8:57, Carlina could not be a worse elected official if she tried. To be so bad so fast out of the gate - it's mind-boggling. Can't wait to see her re-election campaign materials to find out what she points to as her "accomplishments".

You get what you vote for

Carlina Rivera is such a disappointment locally. Votes more more jails, to destroy the park,. the Tech Hub giveaway, it is really sad and stark to see where she really stands when it matters.