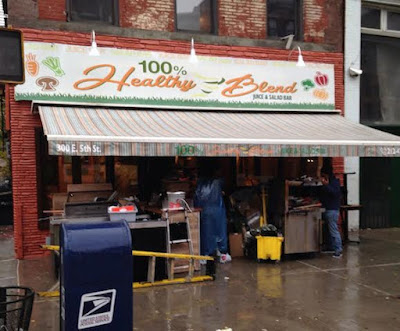 After less than three months in business, 100% Healthy Blend (or maybe just Healthy Blend) has closed at Second Avenue and Fifth Street.

EVG regular Carol From East 5th Street, who shared the top photo, noted that workers were cleaning out the space yesterday.

There's also a notice from the Marshal, indicating that the property is now in possession of the landlord... 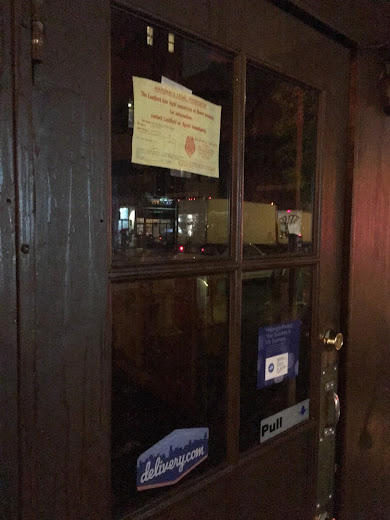 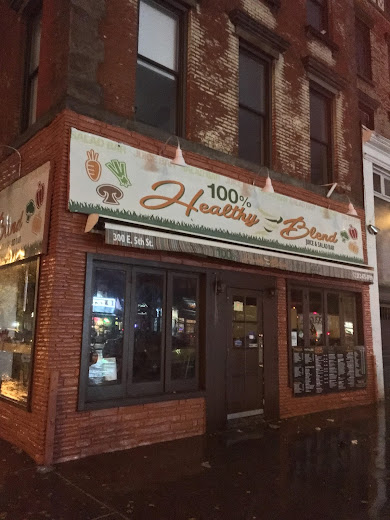 The quick-serve restaurant featured a sprawling menu that included create-your-own salads ... as well as juices, smoothies, empanadas, arepas and much more.

The corner spot was last home to Dahlia's, busted by the SLA after serving a reported 50 minors one night in January. The Mexican restaurant then closed in May.
Posted by Grieve at 4:20 AM

Email ThisBlogThis!Share to TwitterShare to FacebookShare to Pinterest
Labels: 100% Healthy, The Marshal

Has this place set a new record for shortest run?

Something is very wrong when so many business plans fail after six -- or after three! months.

Landlords aren't verifying start up capital? or they don't care?

Note to those planning to open a small business -- work out all of your monthly expenses in advance. (Ask for comps on utilities, etc.)

Then multiply by 24. That will give you two years to catch on.

I believe the "Healthy" guys also owned Dahlia's. I figured they were waiting it out to get their liquor license back and gave up when it wasn't going to happen. They apparently still run the tapas restaurant on 9th street that got busted for serving minors several months ago. Not sure if it's still called Dahlia's.

Did I hear someone say, "RENT IS TOO DAMN HIGH!"

9:52am would make alot of easy money with his or her advice.

I could see it now "Small Business Startup Consultation"

"A consultation on how to start a small business in NYC in one email for just $20 flat."

Someone purchases a consultation and you send back just this:

"Save two years worth of rent and other expenses. Best, (your name)"

The selection at this place always seemed to be a bit shvach.

Just wondering how small business owners aren't clear about the money they do spend on key money, security deposits, build outs, etc... only to lose the business after such a short time!

Not good for them, and no help for the nabe either!

Meanwhile there are hundreds of teenage alcoholics getting their fake IDs and little red outfits ready for SantaCon.

This place looked nice then when you went in the food was crap. Not really healthy and just awkward to even be in there. Salad bar with iceberg lettuce overpriced and just ridiculous. They should reopen Alt Cafe there instead they would make a fortune. I hate fake health food places. I hope they chick that cool furniture out on the curb though I would take that all home in a second.

It was awkward in there. I was the only person inside during both visits. And the workers seemed to glare at me while I looked at the menu. I ended up just getting coffee both times (a bit of an assembly-line production too).

Cool furniture? It was awful and I think one of the reasons for their failure. Besides good food a restaurant that wants to succeed in NYC needs to have a clear and attractive identity (like Liquiteria, Bare Burger, Mermaid Inn). The furniture looked like remnants from an Italian living room in Queens mixed with some random pieces from the Salvation Army. There was no ambiance at all.

However I see that they did leave several pieces of furniture after they moved out. If you're truly interested I would keep my eyes open. There is a garbage pick up Saturday morning in the neighborhood. You might find some pieces in the street. Or look for Alen the super (tall blond Ukrainian guy) who might be able to help you.

Thanks! Sorry but the two antique chairs they had are amazing and if you saw my apt you would get why they would fit right in!

Sorry to be so negative Eden Bee. I am sure in the right environment the chairs would be lovely. It was the odd mixture of furniture that looked so uninviting.

Yeah I hear ya. The whole place sucked so good riddance.