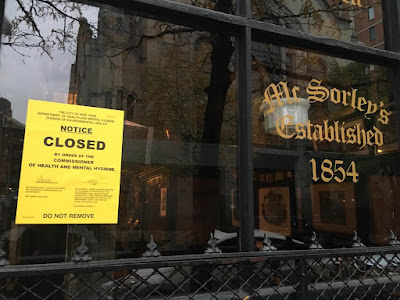 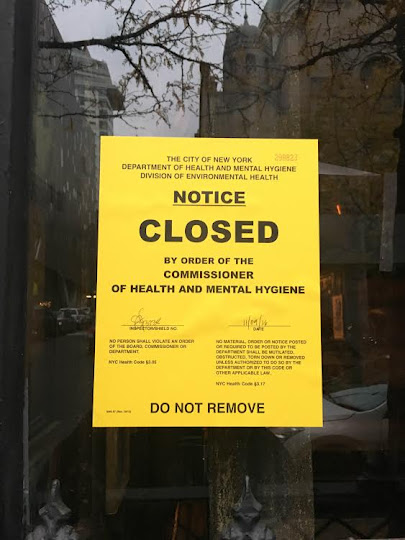 The city has not yet posted yesterday's inspection online.

In 2011, the city made McSorley's dust off the bar's famous wishbones, placed there some 100 years ago by doughboys headed off to war...(McSorley's also had to remove bar cat Minnie McSorely.)

Given the bar's ample presidential paraphernalia, an inspection the day after Election Night seems curious.

The inspection report still isn't online. (They had an A, with only two minuscule violation points following the last inspection in May.)

According to Gothamist, The Health Department's inspection yesterday "revealed several critical health hazards, including evidence of rat activity, food held at the wrong temperature, and conditions conducive to vermin and pest activity."

The report is now online.

There were 42 violation points. The main three violations:

In the past two years, they've only had two violations points total.

McSorley's is a great place to enrich your gut microbiota. Closing it could pose a health hazard.

This better be temporary.

I imagine they had Trump stuff up? they seem in that Old Town vein.

I was at McSorley's a few months ago and the waiter suggested we leave because we weren't drinking enough. We were nursing our second round (meaning we had ordered 8 of their beers). Sign of old age when you are asked to leave a bar because you're not getting drunk. But I'm not going to hold a grudge.

I was waiting for them to close the place since I fort went there 45 years ago. What took DOH so long? Probably science just caught up to what was growing in there - a virtually petrie dish of death.

Whatever happened to Minnie? Is she still with us?

Gothamist posted an article stating it was due to rodent activity and food being stored at improper temperatures. Although, what restaurant does not have some rodent activity... And more importantly, who even eats food from McSorleys?

I hope the DOH never examines my kitchen. In my defense, I haven't washed the dishes from last week because then I'd just be making more dirty dishes. Makes sense.

And I once ate a scoop of mustard right out of the glass on the table at McSorley's. I'm totally fine.

McSorley's makes a killer burger and their hot mustard with cheese and sleeve of saltines is perfect beer drinking food.

I went to McSorley's a few years ago, and when carded I gave them my drivers license from Puerto Rico. The waiter said "Ugh, you're Puerto Rican?! You people RUINED this neighborhood," and then moved on to check the other IDs of our party. I was stunned, and he comes back around and says "You, what do you want." I said "Nothing, I'm fucking out of here," and the guy looked incredibly relieved. Never had I been made to feel like such a second class citizen. I can't say I'm sad to hear DOH shut them down temporarily, fuck that place.

I've been going there for several years and have eaten their food. I workout and never have gotten sick from them. The germaphobic morons can go to their pristine taverns and remain boring.
I love McSorley's and the crew there.
Where else can you have fun meeting people from all over in a historic pub sharing round after round?

That's highly suspect. How or why could a place with this much history and business be shut down? Shouldn't have they mastered the art of cleanliness and maintenance? Its odd. I've walked past there every day for six years. Its not my crowd. It seems touristy and a bit old school/straight/ white male oriented. But, if that's your thing, go for it.

"Old school/straight/white male..."
Yes, McS was Men Only until 1970 when the laws changed and they had to admit women:

After 54 years, Barbara Shaum Leather has closed. Barbara Shaum, the legendary local shop owner who also happened to be the first woman officially admitted into McSorley's in 1970, died last Sept. 17. She was 86.

Do they allow Female Rats in there?

Like the rats, I enjoy McSorley's cheese plate. The spicy mustard and raw onions surely immunize me from harm.

I was in there when 2 women dressed in biker leather wanted to be served. The bartender and old codger said "Fuck you! Dragged a statue of the Blessed Virgin out from under the bar slammed it on the top and said, She was the only woman allowed in the bar. Then in unison the bar broke out in a chant of "Cunt! Cunt! Cunt!" that was so loud and vial that it could drive out a disease. The women left. What a place, huh.

They were right to ask you to leave. You come in there eight strong and order two rounds of beers but don't order food? Not ONE of you was hungry? 'Sounds to me like you were some workgroup who wanted cheap meeting space. You millenials are so fuc king cheap. I see you do this from time to time at a place I frequent. You literally sit around in the middle of the room, no food, just empty or half-empty glasses, maybe one or two of you drinking. And you act like it's your living room too from the classic group psychology where the more of you there are, the more you think you can yell, laugh at full volume etc. So not only do you hog up two or three tables and don't spend enough money, but you act like you're at home.

If I had a bar-restuarant the minimum for eight people is $120 ($100 tab plus $20 tip) to be paid up front. For that you get whatever adds up to $100 and I'll throw in something extra. This is a business not a meeting space.

You wanna drink with seven other people? Okay, but each of you should order at least fries, a salad, something to snack on.

When forced to admit women, the owner who was a woman who had never been in the bar, was quoted as saying, "What kind of woman would set foot in a place like that?"

5:38AM - You're unhinged and you have poor reading comprehension.

"Sign of old age when you are asked to leave a bar because you're not getting drunk. But I'm not going to hold a grudge."

Obviously not millennials. Nor did they come in "8 strong," they had 8 beers. The point is because they weren't getting shit-faced (like, say, millennials) they were asked to leave. Oh, the irony for you.

But if McSorley's wants to run their old-timey bar like a Times Square restaurant, that's their business ... while it lasts.

There'd be less rats if they had a damned cat... D'oh

who cares it's just a tourist/NYU place now..it's soul left years ago

11:03 AM: Thanks for explaining to 5:38. There were only two of us. (A round at McSorley's is two beers for those who've never been there, and they only have two kinds, a light and a dark draft.) I'm surprised to hear some of these stories. Haven't they every heard of lawyers at the old place?

I have often "heard" the term "mystery meat" but when it's printed on the menu I draw the line.