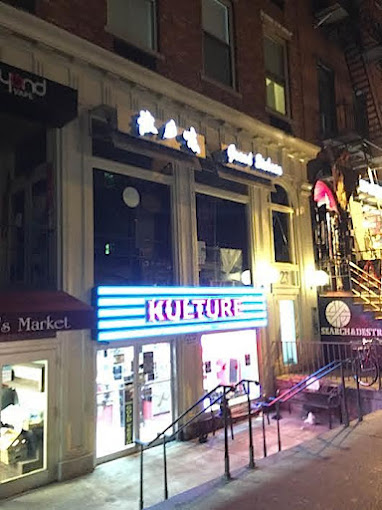 An EVG reader shared the news that Grand Sichuan in the upper level at 19-23 St. Mark's Place is now closed ... there is a 30-day notice of termination taped to the front door here between Third Avenue and Second Avenue... 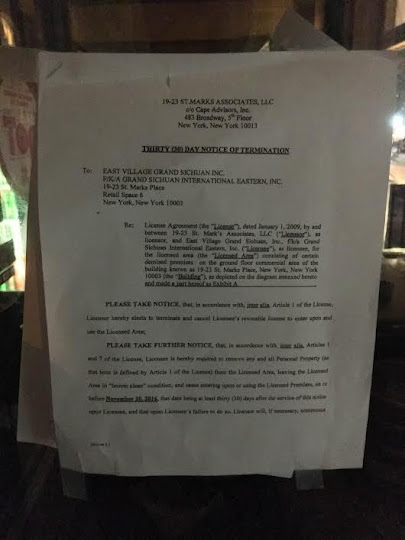 The restaurant, which received high marks for its Sichuan cuisine, was one of four related Grand Sichuan restaurants in Manhattan.

We don't know the official reason for the closure.

Former employees here had been taking part in regular boycotts outside the restaurant. Among the employee allegations: Stolen tips, no overtime and no minimum wage. Per Gothamist:

In 2012 the Chinese Staff & Workers Association filed a charge against the East Village location for firing two workers and issuing a final warning to another. The case was tried in 2013 and the company was found to have "engaged in certain unfair labor practices" and forced to backpay wages.

Clearly there wasn't enough marshmallow varieties on the menu.

that is pretty sad, I always liked this place. Crappy if the worker allegations are true.

I tried to give this place a chance numerous times over the years, but the food wasn't great. I didn't know they had issues with their employees. That makes it even more unappealing.

The food started out really good but went downhill when they scrapped the menu of Chairman Mao'a favorite dishes, I heard the business had come under new management around that time. Now IMO the two Chinese places on 3rd Ave between 12th and 13th are better.

this is devastating. anyone know who else will now deliver the best sour string bean with pork, cold scallion cucumber, pickled cabbage, and soup dumpling???????

If you want some good Chinese food head over to Sammy's Noodles on West 11th St. and 6th Avenue, the best cold noodles and garlic sauce dishes in town.

Another new Chinese option too: Marco's on 2nd Ave btw 22nd + 23rd is excellent with lightning-fast delivery. The Cottage on Irving used to be our go-to for delivery, but the quality was inconsistent, and Marco's is waaay tastier. Support them!