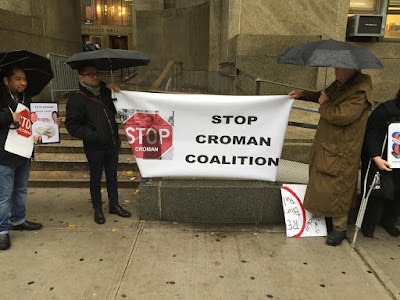 Landlord Seve Croman was back in criminal court today... and the case was adjourned until Feb. 7, which is also the date for his civil trial.

A handful of Croman's tenant's braved the rain to attend... 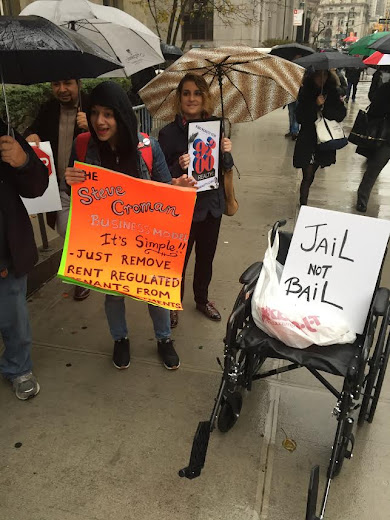 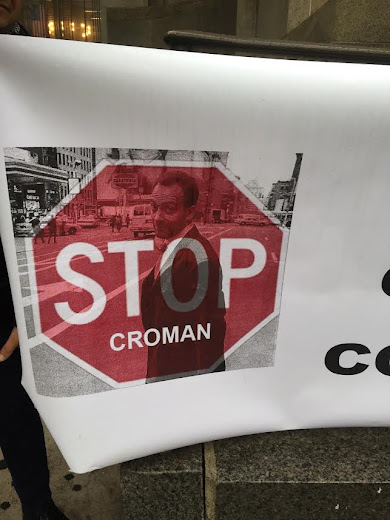 Those in attendance were not aware of today's legal proceedings that led to the adjournment.

In May, New York Attorney General Eric Schneiderman announced 20 felony charges and civil suit against Croman, who owns 47 buildings with 617 units in the East Village.

Photos today via Steven
Posted by Grieve at 3:00 PM

I predict a slap on the wrist and his tenants wont get to choose which wrist.

When will this clown receive his day in court? There is such an obscene level of procrastination and apathy on behalf of the justice system here in NYC that it leaves me seething with anger and disappointment. He is constantly ordered into court, yet the case is delayed, adjourned or postponed. Why? Because of his social and financial stature, he is somehow if not seamlessly afforded rights beyond those of us who aren't as powerful or as wealthy? This man must be a man and take accountability for his ghastly deeds towards the lives he ruined. When will this take place? Next year? In another year? How much additional material does the defense require in order to proceed with their case in front of a judge and jury? Adjourned until Feb of 2017? What a crock of shit.

Our state court system is an absolute disaster. There is widespread corruption and bribery. On top of that, there is a "favor bank" a la Bonfire of the Vanities, and frankly a problem of competence. Judges go out of the way to provide near-infinite adjournments. You can drag out a case for 5+ years without even providing an explanation why you need extra time. In some states, the state court system is even better than the federal system! In New York, our state judges are generally failed lawyers who went to terrible law schools and worked at bottom-barrel law firms. They couldn't care less about injustice. Don't expect a different result here; I would be shocked if this scumbag gets any jail time whatsoever.

9:03: you're right. Our justice system is a total disaster and joke btw, which more and more seems to be rigged. Just look at how Trump became elected.

None of us should expect this asshole (Croman) to receive a sentence that fits his crimes. Most likely he will somehow be exonerated and dismissed with community service and fees. I guess money and power does buy you freedom. The justice system can do whatever they wish. But Croman has to face himself in the mirror every day, realizing his true, ugly character and the homes and security he destroyed from hard working families. Money and power aren't everything.

I do hope though for the sake of his victims, they can try to move forward and let go, however difficult it might become for them. :(

What about the Israel brothers in Brooklyn? Read about them in the Times. Horrific landlords. Paid guys to roam the hallways with pitbulls. They are apparently getting community service for their deeds.

@5:42, @9:03, @9:43 - May you never be charged with a crime. If you do, may you understand the importance of proper discovery proceedings a fair judicial system. That understanding will come when you are facing charges that you feel are innocent of.

I'm not saying Croman is innocent, I'm just saying that everyone - EVERYONE - deserves their fair process. Yes, it is a long process, but justice will come once it is proven beyond a reasonable doubt.

Charged in May and no trial yet, wheels of justice are turning slowly. No wonder Trump hardly ever settles a case.

Courts typically favor landlords when it comes to adjournments.

I cannot see a tenant being able to get that many adjournments.

Just another Rich Crook getting away with wreaking havoc on the working class & Poor. He commits fraud and harasses tenants and forges just about every document he can. Where is the Attorney General Eric S in all of this , How is this allowed. !!! This crooked Judicial System proves to me its who you know and how much your willing to Pay.

DISGUSTING MAN - HE AND HIS WIFE & KIDS !

The article write:
Judge Jill Konviser set his bond at $1 million, and he was free to go.

Comment: I think this is error. It should be $500,000.00
Unless last minute something got revised?

Anyone know how to check this out,

Let see now That finally Croman get a "real" feelings on how it is to be attacked as a respondent and the case links to arrest and jail/prison time if convicted. If he have feelings he may suffer what his victim suffered ( the stress, the going thru hard time daily, etc). And more

The other issue is those $ that went to employee bonus per what the civil case mention + all the charity contribution / political contribution , legal expense, buyout money tenant got were they from bank fraud $???? Anyone know?

Hear that Croman in the criminal case he also had to surrender his passport. Anyone know?

Another error found in this article next to the listed $1 bail is "
In June, Croman pleaded not guilty to the criminal charges. Judge Jill Konviser set his bond at $1 million, and he was free to go. Croman's attorney is the high-powered Ben Brafman"

I removed the last paragraph with the information from the Vanity Fair article. Too many factual errors.

When buyout and frivolous lawsuit don't work Croman uses repair, construction and hazardous condition to attract tenant which means hoping for water leak and ceiling collapse on top onto his tenant killing them to bypass his criminal activity and fraud/ false document he files into various places.

If it wasn't for the punitive communist system known as rent control, then landlords like Croman wouldn't need to resort to these alleged tactics to benefit from the properties they rightfully own.


Croman and all the other greedy predatory landlords knew exactly what they were doing when they purchased their buildings. There is no excuse for the harassment and torture of tenants by these depraved landlords, who have destroyed the health, lives and livlihoods of so many people, in addition to ruining entire neighborhoods, driving out the Mom & Pop stores and destroying the very heart and soul of our city.

What planet do you live on? You call the rent control system communist....? and justify landlords like Croman having to resort to tactics to benefit from their own property....WHAT ABOUT THE 20 FELONIES and BANK FRAUD AND TAX EVASION and 62 MILLION in Profits ???? What about the Israel brothers pleading guilty today to what they did to their tenants? If you are paying any taxes...you and all the taxpayers are footing the bill for their crimes. You are paying for these criminal landlords to use and abuse the court system to harass tenants with their frivolous and harassing court cases at the tazpayers expense, in order for them to reap huge profits. You sound like a landlord to me.

The owners of buildings pay a tremendous amount of property taxes, water, sewer and have to provide heat, insurance, repairs and are paid pennies by tenants who have more rights to the property than the owner, all dictated by the government. If that's not communism, then what is. I don't condone harassment of tenants at all. The system needs to be fixed. It all can't be the fault of "greedy" landlords. I'm sure that anyone in favor of rent control would not feel the same if the government told them that they couldn't have the full use of something they owned and were forced to allow others to use it for free while they bear the cost. Easy to spend other people's money when you have no skin in the game yourself.

* This case is more relate to the tenants as the subject is toward, tenant harassment, using illegal tenant relocator attacking tenant to accept buyout or see you in court. It is not fair that ag is only recognizing a.f. and not the others.

* Comment: What Croman got himself into now I feel high % came from those people he hires and the way they handled the case.

* I feel ag need to amend the civil/supreme court case to include croman lawyers and employee (present/former) who came forward producing false document, went around tenant attacking , signing off false affidavit/notary document etc.... and yes include all the process server and notary public in too.

Why are this group of people not recognized and why are they isolated from being recognized? Don't forget these people came forward helping in tenant attack and played a very important role in what has happened. The way they came forward resulted Croman to what he got into today.....arrest, ag suing him etc...


I am wishing the ag can amend the supreme civil case to include all the reps who won those office poll bonus and rep who went out attacking innocent resident of nyc and include croman lawyer, process server, debt collector, notary public etc....all who played a high % in helping croman with tenant harassment.