L'Apicio serving its last meal on May 20 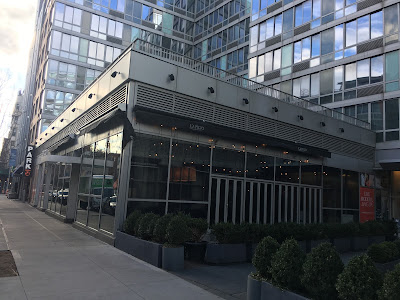 L'Apicio has announced a closing date. The upscale Italian restaurant on First Street in the Avalon Bowery Place complex will shut down after service on May 20.


Back in March, we reported that Chef Sujan Sarkar was applying for a new liquor license for the space for an unnamed restaurant that will serve "upscale modern Indian cuisine."

Sarkar is the chef partner at Ek Bar, "India's first Artisanal cocktail bar." He is also the chef of Rooh, a similar-sounding restaurant that recently opened in San Francisco.

L'Apicio debuted in 2012. Here's what Pete Wells at The New York Times had to say about it in a generally positive review from December 2012: "L'Apicio can deliver a very enjoyable night out if you don't ask too much of it."

This large space with outdoor seating (capacity inside/outside is 266) here between Second Avenue and the Bowery was also home for four years to the Bowery Wine Company.

Previously on EV Grieve:
Chef Sujan Sarkar bringing 'upscale modern Indian cuisine' to the Bowery
Posted by Grieve at 4:10 AM

Email ThisBlogThis!Share to TwitterShare to FacebookShare to Pinterest
Labels: L'Apicio