'Smithereens' returns to the Metrograph this week 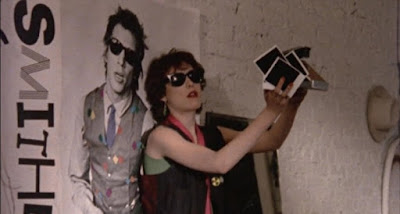 "Smithereens," the dark comedy from 1982 filmed in part in the East Village, makes a return engagement this week to the Metrograph, 7 Ludlow St. between Hester and Canal.

The film, which marked Susan Seidelman's directorial debut, is set in the East Village (and other downtown locales). Wren (Susan Berman), a suburban New Jersey native, is eager for downtown fame, plastering "missing" posters of herself on the subway and elsewhere. She sees a meal ticket in Eric (Richard Hell), the hot guy with a short attention span in a band. And there's the too-nice Paul (Brad Rijn), who pursues the uninterested Wren. Love!

"Smithereens," made for $40,000, was the first American indie invited to compete for the Palme d'Or at the Cannes Film Festival.

Last July, I spoke with Seidelman about "Smithereens" and her follow-up film, "Desperately Seeking Susan."

Here's what she had to say about the legacy of "Smithereens:"

I think I was trying to document what it felt like to live in that neighborhood in that part of the city at that time. I never really thought about it in terms of whether the film would pass the test of time or be a time capsule or anything.

But the fact that it ended up being pretty authentic to the environment, to the neighborhood, is maybe what enabled it to pass the test of time.

The film plays Wednesday at 2 p.m., Thursday at 5 p.m. and 9:15 p.m., and Sunday at 3:15 p.m. "Smithereens" is screening as part of Metrograph A to Z, a collection of films they think everybody should see.

Previously on EV Grieve:
Q-&-A with Susan Seidelman, director of 'Smithereens' and 'Desperately Seeking Susan'
Posted by Grieve at 4:00 AM