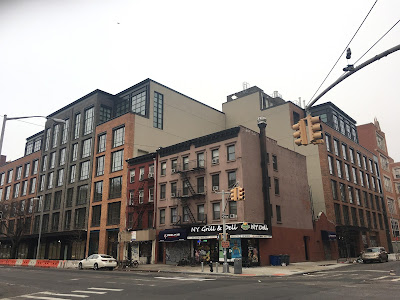 Here's part of a news release that arrived late last week about Steiner East Village, the block-engulfing condoplex on Avenue A between 11th Street and 12th Street...

Steiner East Village has welcomed its first residents, as closings have begun at the 82-unit, 7-story, full service luxury condominium developed by Steiner NYC. The project, which includes one- to four-bedroom condos and penthouses, is now 75% sold and has entered its final phase of sales.

The release includes a rendering of the pool ... 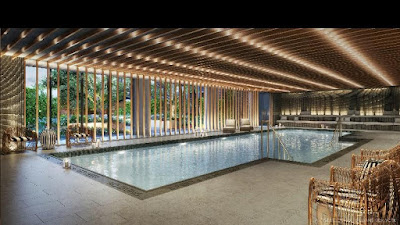 And no word yet about what might be coming to Stei Town's retail spaces along Avenue A.

Developer Douglas Steiner bought the former Mary Help of Christians property in 2012 from the Archdiocese of New York for $41 million. During the summer of 2013, workers demolished the church, school and rectory.

Previously on EV Grieve:
The 'senseless shocking self-destruction' of Mary Help of Christians 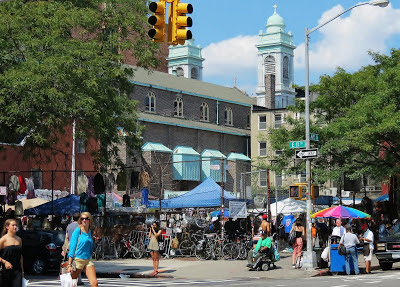 [The church property as seen from 11th Street in August 2012 via Bobby Williams]
Posted by Grieve at 4:00 AM

I really hope smaller stores and service business will eventually occupy these spaces. I doubt Steiner will go for a big corporate store or a supermarket. Don't expect signage that is not approved by the building either. It's been a long haul since this project started glad to see and "hear" it's wrapping up.

I HAVE to swim in that pool sometime.

"An abundance of light and air."

How is it that their roofdeck has "protected" views??

Every weekend hoards of drunken idiots come down that stretch of 12th Street where this building has its main entrance going to and from the bars on upper Avenue A and Doublewide and I keep thinking about the new residents of this building and how they're going to handle that. I can't imagine them being okay with the noise or having to deal with drunken idiots as they go out and come home. Maybe they will be able to get the cops to do something about it since they are the monied folks.

If those big windows aren't mega soundproofed, they are in for a whole lot of woo-hoo noise! That's the one thing I wish I could afford to change on my rental, but the landlord won't do it. I would even pay for part of it to have soundproofed windows. It's bad enough now that I can't even open my windows most nights. It used to be you could leave them open and enjoy the breeze on a nice night.

The storefronts are massive. It's disturbing, all the light and air for us is gone. It's a fuck you to the neighborhood.

This place really hurts the community in many ways. I will say it is nicely designed and fitting on the outside and looks beautiful on the inside. But, the politics of it are ugly.

It's grossly out of scale. It's a warehouse building. Nothing new in architecture. It's all about size, and pain towards the neighborhood. It's funny.

https://www.6sqft.com/what-lies-below-nycs-forgotten-and-hidden-graveyards/
I just read this article by Andrew Berman. All that money to sleep on top of 36,000 bodies? Creepy.

Wait til those East Side High School kids bump into these folks. Heh heh.

Dem spirits rising up from the old cemetery -- and angry too at being displaced. I wouldnt want to live there no matter what price.